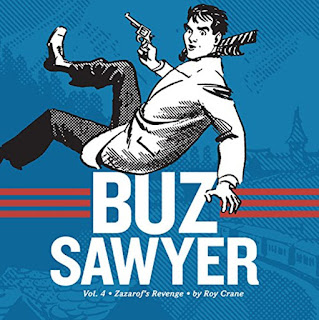 I've been a fan of comic strips and comic strip characters for as long as I can remember. My early favorites include Charles Schultz's Peanuts (Charlie Brown and Snoopy) and Jim Davis' Garfield. I wasn't old enough to experience action/adventure strips, so I never really discovered those until I was an adult. I first came across Roy Crane when his Captain Easy and Wash Tubbs strips were reprinted. I fell in love with the characters and the creator's artwork instantly. Then I learned he created another strip after Captain Easy and had to check it out. That strip was Buz Sawyer.

Buz Sawyer Book 4: Zazarof's Revenge is a collection of action, adventure comic strips from 1949-1952 by Roy Crane. It is available in Hardcover from Fantagraphics.


Buz Sawyer was created at the end of World War II. Buz Sawyer was originally a pilot for the navy until the end of the war. Then he becomes a trouble shooter for Frontier Oil and travels the globe moving from one adventure to another. Many girls are originally introduced vying for his affection, but he eventually marries a very down-to-earth neighbor named Christy. Occasionally she joins him on his adventures, but most of the time she is at home worrying about him.


Artwork. The artwork is absolutely gorgeous! Roy Crane knows how to make the most of a line. Every line, every stroke communicates so much with no superfluous marks made. It's very minimalist and cartoony in the best sense of both works. And the use of shading makes each strip look like an oil painting masterpiece. At times you forget that these are black and white. Even if the stories were no good, the artwork would more than justify picking up the book, although the exotic locations weren't quite as well rendered as in previous volumes. I hope this isn't a sign of a decline to come.

Action. I love the variety of action from fist fights to gun battles to action in the air and on the sea. It's all high energy with high stakes that makes you feel like you are part of the fights and other perils.

Adventures. I love the locations Buz travels to. It's fun to see different parts of the world. I also enjoy the variety of troubles Roy Crane puts his protagonist in from revolutions in South America to sneaking in and out of the Communist Block in Europe. The stories were very much a product of their time focusing on the concerns of the day. But Roy Crane crafts them so well that they feel vintage, not dated. Roy Crane continues to improve in his storytelling, and this is his best yet.

Production Value. Fantagraphics has done an amazing job finding, restoring, and presenting these strips so they look their absolute best. The black lines are crisp and clean with solid darks. The book itself is well designed with wonderful bonus material. This book was done right. Good job, Fantagraphics! Keep up the good work.


Silly Animal Comedy. I am not a fan of silly animal sidekicks (like Bandit in Johnny Quest) that add nothing to the story beyond attracting certain viewers/readers. This volume unfortunately has two stories with such characters, one featuring a monkey and another featuring a parrot. They are by far the weakest stories and hardest to get thru.

Lack of Direction. After World War II ended, it feels like Roy Crane wasn't sure what to do with his character. By this volume in the series, Buz is firmly established at Frontier Oil, but he still is sent on random adventures that never fell connected or like their advancing a bigger story.

Characters. Buz Sawyer does not have the most interesting characters. Buz and his wife are a pretty typical 1950s couple with little to distinguish them from any other 1950s couple. The antagonists are also pretty one-dimensional with little more than their greed, fear, desire for revenge, or lust for power to define them. Occasionally they'll have some quirk such as a fear of germs or a desire to never be photographed, but it's not enough to make them interesting on their own. This is one of the few areas where Roy's previous efforts were much stronger.


I wish the stories would stick to the action adventure and not veer off to the silly animal comedy sidetracks that are neither funny nor entertaining (although Roy Crane draws some great animals). I also wish there was more of an overall story instead of a series of adventures that don't really connect with each other. It feels like the creator isn't sure where to take the character.


Buz Sawyer Book 4: Zazarof's Revenge is the best of the Buz Sawyer books. Roy Crane continues to produce the most beautiful artwork in comic strips and his storytelling continues to get better and better. The adventures were even more exciting, more gripping, and better told than in previous volumes with a few unnecessary comedic side trips that went on too long. I give it a solid 4.5 out of 5 eReaders.