Book Review - The Innovators: How a Group of Hackers, Geniuses, and Geeks Created the Digital Revolution by Walter Isaacson 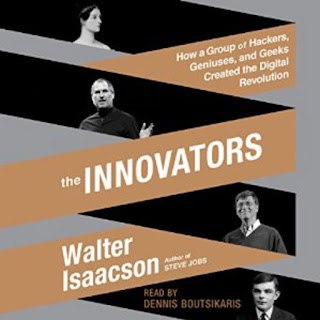 I'm a huge fan of technology and huge fan of looking behind the scenes. I love seeing how things were done. The Digital Revolution is probably the most influential event in the 20th century touching the lives of every man, woman, and child and every industry.

The Innovators: How a Group of Hackers, Geniuses, and Geeks Created the Digital Revolution is a nonfiction history written by Walter Issacson covering the rise and development of the digital era from the invention of the first computer to the Internet and personal electronic devices. It's available in all formats: eBook, Audiobook, and those old-fashioned paper book things.


The Writing. This was the first book I've read by Walter Issacson, and I was thoroughly impressed. The writing was clear and precise. It was completely engaging, moving at a great pace and never became slow or boring. This book never talks down to the audience, never skips necessary technical information, nor tries to show off or impress the audience with technical jargon or poor explanations. The author makes everything very easy for the average reader to understand.

The Coverage. The Innovators covers over a dozen people and their impact. It would be really easy to pick a favorite or to exaggerate the contribution of one or two men (such as been done with Steve Jobs since his death). But the author understands that the revolution happened over many decades and relied on the contribution of many people. The author does an excellent job giving each character and each innovation sufficient time inform the reader of his or its importance but doesn't exaggerate any role.

The Focus and Context. A book like this could go a lot of ways. The author chose to emphasize the impact of each innovation and his innovation and doesn't let history dull the importance. For example, smart phones are really big right now, but many people have forgotten that a decade ago mp3 players were just as big and revolutionary. And a great number of people weren't around decades ago when the pocket-sized transistor radio hit the market and made just as big of a splash as the iPod or iPhone. The author is very good about pointing such things out to the reader and helping the reader understand the effect for its time.

Pacing and Entertainment. This is a very long book, and yet it felt like it flew by. Any technical topic or historical topic has the danger of being dry, boring, and hard to relate to, but the author's strong writing kept the story moving and the events exciting and relevant to a modern audience.


The Innovators: How a Group of Hackers, Geniuses, and Geeks Created the Digital Revolution is an incredibly well-written book about one of the most important topics of the 20th Century. It is as entertaining as it is informative. I highly recommend it for all readers and give it a solid 5 out of 5 eReaders.