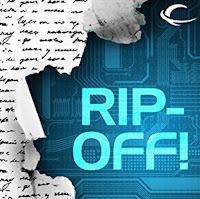 I love short stories, because they focus on one story or one idea. Novels on the other hand tend to be three or more short stories that eventually meet at the end chopped up into chapter-sized bits. Each chapter ends with the obligatory cliffhanger before switching to the next part of a different story. When you finally return to the cliffhung story, you've lost a lot of interest, and the resolution is usually pretty quick and simple. I love short story anthologies, because there is usually a previously undiscovered gem or two in an otherwise unremarkable collection.

Rip-Off! is a science fiction and fantasy short story anthology with stories by John Scalzi and others. Each author was asked to take the opening line of some work of literature and write a story based on that. Each author describes why he or she chose the line they did. It's available as an audiobook from Audible and an eBook or paperback called Mash Up.


Muse of Fire by John Scalzi. A physicist is working on a forcefield made of plasma his company wants to sell for money, but he is secretly using it to free his muse of fire girlfriend trapped in Hell.

Begone by Daryl Gregory. A man sees his clone taking his place with his wife, child, and work and makes several attempts to kill him and take his life back. Involves witches.

Karin Coxswain or Death as She Is Truly Lived by Paul Di Filippo. A named Karin dies, goes to Hell, and because a riverboat captain who transports souls across the river Styx. One day her ex-husband dies and books passage on her boat.


The Lady Astronaut of Mars by Mary Robinette Kowal. An old woman who was the first female astronaut to Mars in her youth is now very old and caring for her ailing husband close to death when she is offered a chance to return to space, but it will mean abandoning her husband.


Fireborn by Robert Charles Wilson. Two children from a rural community become involved with their mythological godlike figures which involves dancing and ascending to the moon. Both have their own plans, and loyalty is explored.

The Evening Line by Mike Resnick. A man comes into money and suddenly women line up to marry him. Mages are employed by all parties to affect the outcome.

Writer’s Block by Nancy Kress. Fighting writer's block, a man discovers the true cause revolves around his wife in a fantasy tale.


No Decent Patrimony by Elizabeth Bear. A man deals with the death of his father.

Highland Reel by Jack Campbell. This tale takes place in Scotland and explores characters from a Scottish myth.

Every Fuzzy Beast of the Earth, Every Pink Fowl of the Air by Tad Williams. This book is a new spin on the Creation story from The Bible with a girl who claims to be God's daughter who wants to rearrange His creations.

Declaration by James Patrick Kelly. A group of people who spend their lives online in a virtual world decide to declare their independence from reality, but life isn't that simple.


I wish there had been more good stories, and that the authors hadn't been so self-indulgent.


Like most short story anthologies, Rip-Off! has a few pretty good stories and a few really disappointing tales. None are gems, and a couple are bombs that I didn't even bother finishing, but overall it is a collection of well-written tales in the science fiction and fantasy genres. I give it 3 out of 5 eReaders.