Book Review: The Heavens May Fall by Allen Eskens 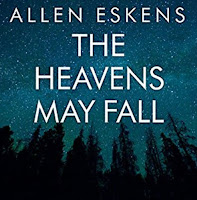 Legal thrillers are fun for several reasons: 1) There's always a mystery to solve, and who doesn't love a mystery, 2) One of the lawyers usually ends up solving the crime and exposing the guilty party instead of the professional detectives, police, etc., 3) The reader is treated to a fictionalized version of the justice system that is usually both entertaining and just, unlike the real thing.

The Heavens May Fall is a legal thriller mystery byAllen Eskens. It's available in all formats: eBook, audiobook, and those paper things your grandparents used to read.


A woman is found dead in an alley wrapped in a child's quilt. Her husband, a highly-paid criminal defense lawyer, is the prime suspect. A cop who had previous negative dealings with the lawyer is in charge of the investigation. The case brings back many memories of his own wife's killing three years earlier.


Backstories. The characters were fairly standard for this type of story, but each had enough unique quirks to keep them interesting. They each had a backstory that not only added interest and helped developed the characters but was a fun little tale on its own.

Not Too Easy, Not Too Hard. Sometimes the mystery is solved too easily because of convenient plot twists or a main character that is so smart they're practically prescient. This story was very logical with events unfolding in a realistic manner and no convenient plot points.

Twist Ending. I wasn't all that surprised at the twist ending, but there was an extra kink I didn't see coming but should have that made it a satisfying payoff.

Satisfying Ending. While the ending was pretty much a "happy ending", there were a few twists and struggles that made it feel like the characters had to work for it and earn it with not everything working out perfectly.


I wish there had been something really compelling or gripping in this story. It's a solid story, but it doesn't really stand out as an incredible story. I'll probably read another book by this author, but I won't feel bad if the cast of characters is completely different, because these were interesting enough for one book, but I'm not sure they could sustain a series.


The Heavens May Fall is a really good legal thriller, but not an exceptionally good one. It has solid characters and a solid story with several plot twists to keep the story interesting leading to a not-unexpected ending that contained an additional turn to keep it above average. I give it 4 out of 5 eReaders.