Book Review - Louder Than Words: The New Science of How the Mind Makes Meaning by Benjamin K. Bergen 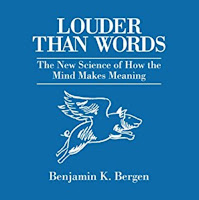 I'm a big fan of how things work. It's one of the reasons I used to buy trade paperback collections of comic books I already owned and had read and DVDs. (I wish they still included the behind-the-scenes stories and documentaries they used to. Oh well, that's money I can save not buying DVDs and TPBs.)

Louder Than Words: The New Science of How the Mind Makes Meaning is a nonfiction book of scientific studies and theories about cognitive science and the embodied simulation model of how humans understand words by Benjamin K. Bergen. It's available in all formats: eBooks, Audiobooks, and those paper things your grandparents used to read.


Detailed the Studies. Too often people say, "A recent study showed or proved..." without detailing the study design or how is was carried out so the listener has no idea whether the study was valid or not. This book meticulously detailed each study so the reader could better judge how reliable the conclusions were.

Willing to Admit What He Doesn't Know. Too often "experts" think too highly of themselves to truly acknowledge their limitations. They may add a small section of "humility" where they pretend to admit they have limitations, but most the time it seems to be nothing more than a show to boost their own image. This author isn't like that. He is a scientist in the true sense of the word willing to admit that science can never prove anything, merely suggest and support.


Ignores Certain Possibilities. It's clear the author isn't religious, because he completely ignores the spiritual possibility which may or may not hold the answer. And while you can't really test for it, a truly objective scientist would acknowledge the possibility.


I didn't feel like anything was missing that could reasonably be added.


Louder Than Words: The New Science of How the Mind Makes Meaning is a very technical yet fascinating look at one theory about how the mind interprets language. It meticulously details the studies performed so the reader better understands and can judge just how solid the science is. Being very technical, this isn't for the average reader looking for an escape. I give it 4.5 out of 5 eReaders.