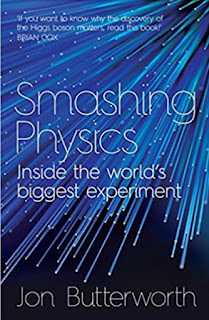 I love learning about science and reading books about the latest discoveries. I've followed the story of the Large Hadron Collider in the news, but wanted to hear the real story from someone actually involved in the project

Smashing Physics is a nonfiction history / science book written by Jon Butterworth. It's available as an audiobook and those paper things your grandparents used to read.


Jon Butterworth is one of many particle physicists working at CERN on the Large Hadron Collider (LHC). He tells the story of how the LHC came to be, about the failure of the first attempt to turn it on, and the benefits of waiting a year. He then discusses the search for the Higgs boson and the media coverage surrounding it.


Honesty / Lack of Dogma. I used to subscribe to Scientific American, but only read it for a year, because the writers were so full of themselves and so dogmatic that they twisted any facts or discoveries to fit their preconceived notions instead of being open to new discoveries. Jon Butterworth does not suffer from such hubris. He is a truly honest scientist that wants to discover the facts whether they agree with his beliefs or not. He is also honest about the limitations of science and how science can never prove anything or lead us to truly know anything. He is also honest in admitting particle physics doesn't actually deal with or detect the particles but the results of their interactions with the particles being conjectured from those results.

Behind the Scenes. The author was at CERN working on Atlas from the beginning and saw much of the work first hand. He also understands what is actually happening and what it means. It's nice not having to read the story thru the media's uneducated and biased glass.

Bigger Picture. The author is aware that particle physics isn't the only area of study of value in the world. He also recognizes the importance of politics, media coverage, and practical applications, and he puts the work at CERN in its proper perspective. This is very refreshing.


Explanation of Science. This book seems to be targeted to the layman who isn't an expert in particle physics.


I wish the author had collaborated with someone who knows how to tell an interesting story and explain scientific concepts in a clear and understandable way.


Smashing Physics by Jon Butterworth tells the story of the Large Hadron Collider and the search for the Higgs boson from someone who was actually there and worked on the project. It's highly technical and will confuse the layman, but for those who want the real story without all the media misinterpretations, this is a great book. I give it 4 out of 5 eReaders.