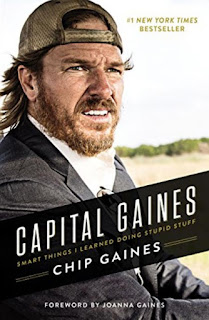 Half the books I read I buy because they are on sale at Audible and look good. Most of the time they are titles I've never heard of by authors I know nothing about. This is one such book.
Capital Gaines The Smart Things I've Learned by Doing Stupid Stuff is an autobiography of Chip Gaines, one of the hosts of Fixer Upper and co-owner of Magnolia. It is available as an eBook, Audiobook, and as one of those paper things your grandparents used to read.


Story. Chip has a really interesting story, and he's honest about the good and the bad.

Message. Chip has a lot of good advice and shares a lot of important life lessons he learned. I also appreciated how he wasn't afraid to share his faith but didn't force it down the reader's throat.

Positive Attitude. Chip faces a lot of ups and downs, and through it all he somehow maintains a pretty positive attitude that is reassuring and inspiring.


Writing. This book feels like Chip came over to your house to talk as a friend. It feels very unpolished and rambles quite a bit repeating the same thing over and over using different words. That's probably the authentic tone he was going for, but it took away a bit from the pleasure of reading.


I wish the author had been more succinct and trusting of his reader to get what he meant the first time he said it instead of repeating it four or five times using different words.


Capital Gaines The Smart Things I've Learned by Doing Stupid Stuff by Chip Gaines tells the story of his life from his earliest ventures into running his own business and meeting his wife to his current hit TV show and rapidly growing retail business. The author is very honest about the good, the bad, the smart, and the dumb and has no qualms about sharing any of it. His positive attitude is very inspiring, but his writing feels rough and unpolished with a lot of rambling and redundancy. I give this book a solid 4 out of 5 eReaders.