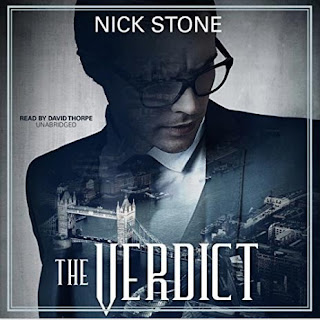 I enjoy mysteries, but it's hard to find a good one that has a twist you both aren't expecting but also makes sense and doesn't feel contrived or like the author manipulated the carpet from under your feet. It's also hard to find one that is interesting as a story and not just how it all goes together.

The Verdict by Nick Stone is a mystery legal thriller novel. It is available as an eBook, Audiobook, and those paper things your grandparents used to read..


Characters. The characters all had a lot of back story and personality. Their story was as interesting for the shear drama of it as the resolution mystery and the legal trial.

Twists. This story had a lot of twists and reveals that I wasn't expecting but made me go, "Ohhhhhh." They all felt like they fit and weren't too contrived or forced.

Pacing. This story moves at a good pace. I never found myself bored or confused.

Legal Background. This story takes place in the UK, but it is clear the author had an American audience in mind, because he often explains how the UK system works and differs from the US system. The explanations are always quick, concise, clear, and interesting.


Length. This book feels as long as it is. It contains so many different elements, and several have little to do with the story. While the story and pacing were good, all the different elements that weren't important to the story seemed to be put there more for misdirection than necessity or benefit of the story.

Final Wrap Up. The wrap up at the end is relatively quick, clean, and simply, which feels a little rushed and cheap after such a long and involved story.

Change in Point of View. The book begins with a prologue telling the story from the point of view of the victim, but purposely leaves out several important points, then switches to a completely different character for the novel itself never returning back to the first character. And when several important pieces of that story pop up throughout the book, the reader feels cheated at being manipulated so obviously and unnecessarily. The book could have completely left out the prologue and it would have worked just as well.


I wish the story had been a little more compact and had left out the riots that really added nothing but took up a lot of time.


The Verdict by Nick Stone was an enjoyable mystery and legal thriller. The end wasn't exactly what I was expecting, but it was satisfying if a little too quickly wrapped up after a very long ride. The characters all had a lot of back story and the book was as interesting for the drama of their lives as the reveal of "who did it" and the verdict of the legal trial. I give this book 4 out of 5 eReaders.