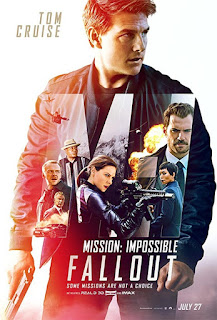 I loved the first Mission Impossible film with Tom Cruise, then the second and third happened and I figured the franchise was over. Then the next two were actually good and got me excited again.


Action. What's amazing about Tom Cruise is he does his own stunts, and the things you see on the screen are practical versus the CGI everyone else relies on. It's so nice to see real stunts. And these were pretty amazing.


I wish this movie had been as entertaining as the last two. I'm not sure what was different, but something was.


Mission: Impossible – Fallout was an exciting action flick with incredible stunt work and a much more elaborate, grounded story than I was expecting. While it contained all the action and troupes you expect from the series, it was different enough that I didn't feel like it was just another movie churned out of the same mold. I give this film 3.5 out of 5 boxes of popcorn.