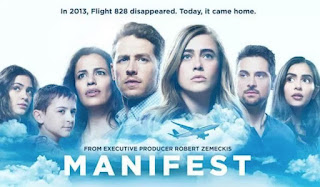 Manifest is a scifi drama TV series that debuted September 24, 2018. In 2013 a plane departed for New York but didn't arrive until 5 1/2 years later. For the passengers it felt like hours. Now everyone must deal with the consequences.


Premise. The premise is unique and fun and holds a lot of possibilities for stories we haven't seen in a while nor have been overdone.

Characters. The pilot episode introduced several interesting characters with a lot of story potential. All were likable and made you care what happened to them.

Scifi/Supernatural Twist. Two characters hear voices that lead them to save lives. It turns out others hear voices and see visions as well. Also the manner of the plane skipping over 5 1/2 years is mysterious. These were presented subtly with characters reacting realistically.


Based solely on the first episode, this feels like a series that will start out strong and compelling, but soon take some strange and unexpected turns that will make it unwatchable. I hope I'm wrong, because the set up is strong enough to last several seasons.


Overall, I'm going to watch this show. The pilot had a great story and raised many questions I want answered. But I'm going to be cautious and ready to walk away when this does take one too many weird turns.
Posted by Jeff Thomason, CE at 7:09 PM
Email ThisBlogThis!Share to TwitterShare to FacebookShare to Pinterest
Labels: drama, fiction, new tv show, science fiction, supernatural, TV show reviews, tv shows