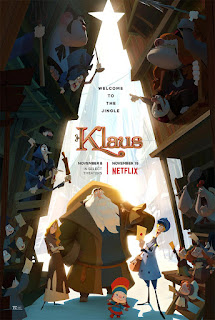 I'm a big fan of experimental animation, even though most of the time the experiment fails. But when it succeeds, oh how it succeeds!

Klaus is a 2019 animated Christmas film from Netflix. It is rated PG for rude humor but is appropriate for all ages.


Animation. The animation was gorgeous. It was 2-D animation shaded to look 3-D, but because it was 2-D it was very fluid and nice to look at and looked painted instead of plastic.

Story/Concept. The story is basically where Santa Claus and writing to him came from. This was a clever approach and story that was fresh but classic.


Main Character. The filmmakers made the main character such an exaggerated caricature of a spoiled rich kid that was really difficult to care about him until he changed significantly halfway thru the film.

Feud. The filmmakers played it too same making the characters very bland. No one could have a strong personality or any real conflict for fear of offending someone, so the characters came off as very bland and unremarkable.


I wish the main character had been more likable and the feud had been dropped. There was enough conflict and drama without it. This also would have helped make the first third less slow and less painful to get thru.


Klaus is an entertaining family film once you get thru the boring and painful first third. The animation is gorgeous. The story of how Santa came to be and why kids started to write to him is clever. Once you pass the first third of the film, the characters are interesting and you care about them and what happens to them. The ending was really nice. I give this film 4 out of 5 Boxes of Popcorn.