Book Review - The Ride of a Lifetime: Lessons Learned from 15 Years as CEO of the Walt Disney Company by Robert Iger 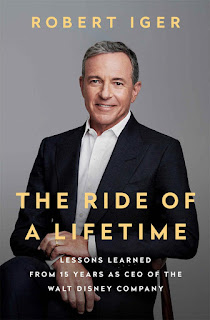 I've been impressed with how Bob Iger has run Disney since becoming CEO of the company. I worry what will happen when he retires. I was curious to hear his insights and behind-the-scenes stories about his time guiding Disney thru so many acquisitions (Marvel, Pixar, LucasFilm) and the launch of Disney+ as well as so many new animated hits.

The Ride of a Lifetime: Lessons Learned from 15 Years as CEO of the Walt Disney Company by Robert Iger is an autobiography of Bob Iger and his career. It is available as an eBook, Audiobook, and those paper things your grandparents used to read.


Organization. This book is really well organized. He tells his story both chronologically, but also by lessons he learned from those he worked with. It's easy to follow, one section naturally leads to another, and it holds your interest the whole time.

Perspective. I really enjoyed Bob Iger's perspectives on so many of the major events I've heard about from the news and other people involved, but never an insider. He revealed details I was unaware of that slightly alter the narrative I've been told. I also appreciate how honest and respectful Bob Iger was of all parties he included.

Depth. This book isn't an exhaustive, detailed history of everything that happened in Bob Iger's career, but he went into enough detail to clearly tell the story and give you a good understanding of what went on.


Name Dropping. I do not like a name dropper, and Bob Iger likes to drop certain celebrity names that have nothing to do with the story simply to include them in his book, especially the name of a former president.


The Ride of a Lifetime: Lessons Learned from 15 Years as CEO of the Walt Disney Company by Robert Iger is one of the best biographies/autobiographies I've read in a long time. It tells the story of Bob Iger's career from his first job at a local TV station to his move to and rise at ABC to the merger with The Walt Disney Company and his eventual time as CEO. It is organized both chronologically and by lessons he learned along the way. He's very honest about what happened and very respectful of all parties involved. Being an insider personally involved in so many recent big stories, he has an interesting insider's perspective I hadn't heard before and appreciated. I highly recommend this book and give it 5 out of 5 eReaders.