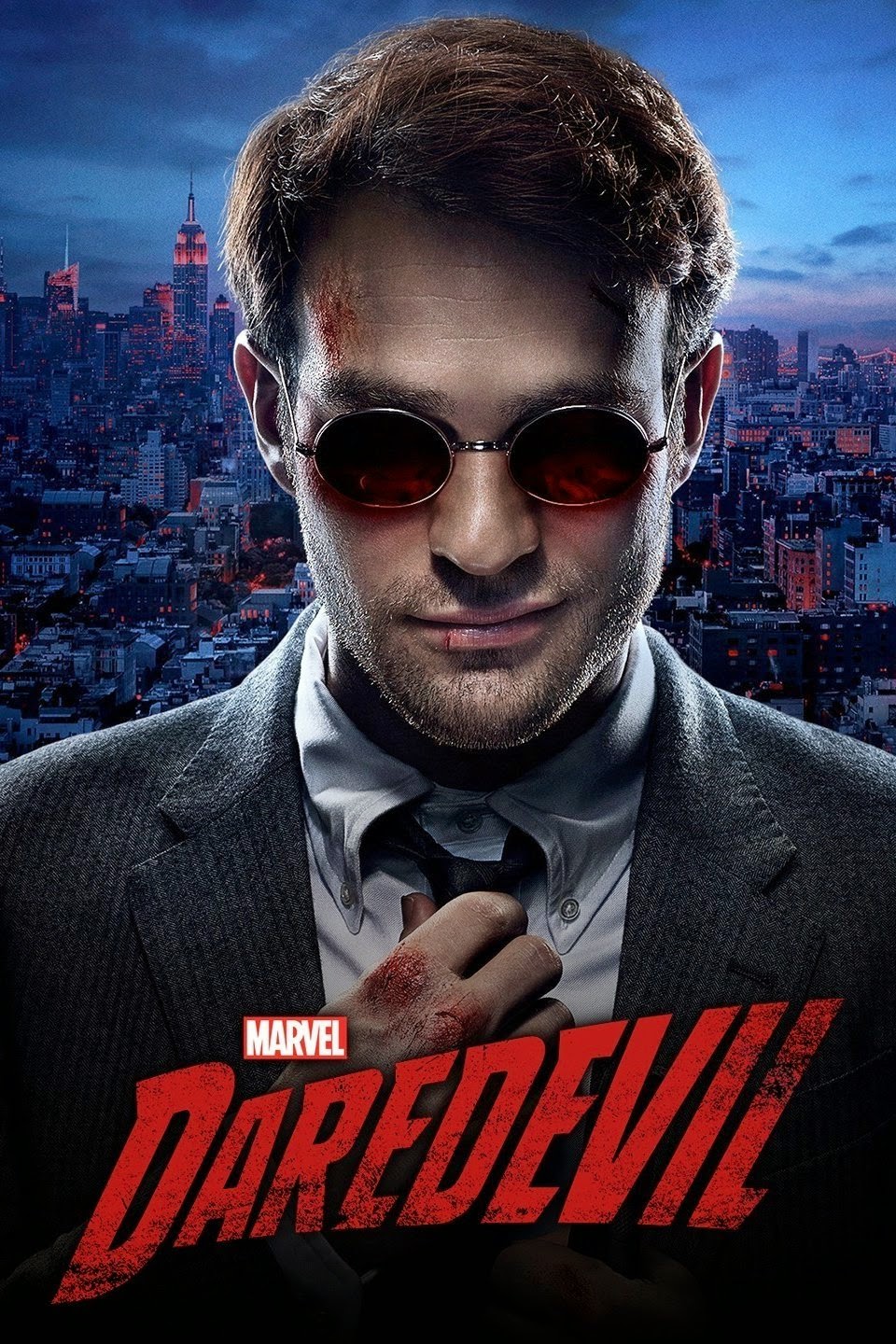 I've been a fan of Daredevil ever since I first saw him in the TV movie The Trial of the Incredible Hulk. I don't think I had ever heard of the character before, but when I saw that I said to myself, "Self, that is the coolest superhero ever! (Next to Lynda Carter's Wonder Woman, that is.)" A few years later I picked up the comic book during the Fall From Grace storyline and was hooked. While I haven't always enjoyed the direction Marvel has taken with the character, I've always loved the character and his potential. (I even liked the Ben Affleck movie--director's cut, of course.) When I heard Netflix would show an original series, I was excited. This was the proper venue for a Daredevil story.

Daredevil is a 2015 Netflix original series from Marvel Studios. It is a 13-episode action drama about a blind lawyer with uncanny abilities and mad fighting skills.


Charlie Cox. When I first heard Charlie Cox had been cast, I looked him up online, because I'd never heard of him. He didn't seem like an obvious choice for the show. But after the first episode, I was sold on him as both Matt Murdock and Daredevil. He really made me feel for him and his struggle. I believed he could do all the unbelievable things he does.

Writing. The writing was top notch. The dialog was believable, plot lines made sense, characters (even the minor ones) were well developed, and events flowed into the next seamlessly. Very little felt contrived or convenient. Almost everything that happened contributed to the overall story.

Pacing. This show is very deliberately paced, but unlike similarly slow-paced shows like Mad Men, this never seemed to drag. The decompression was used to its fullest like a well planned dramatic pause to give the viewer time to savor what was happening and take the enormity of it all in.

Black Suit. Every review I've seen has pointed to Frank Miller and John Romita Jr.'s Man Without Fear miniseries from the 90s as the inspiration for the black suit, but it actually made an appearance a decade earlier in The Trial of the Incredible Hulk tv movie. It makes sense that this is what someone would go out in to fight crime, and I like how ineffective it was in protecting him justifying another suit. It was a distinct look that the viewer would never confuse with all the other thousands of characters dressed in black that is a cliche of so many movies and tv shows. I really appreciate the costume designers bringing something new to the table.

Fighting. The fighting style was really unique which I appreciated. I love it when movies bring something new to the table, and this style was definitely something I hadn't seen before. I also like how many fight scenes there were and how long they take. Too often the hero is able to subdue his adversaries with a few punches and walks away with a bloody lip at most. These fights actually took enough time to feel like someone received a proper punishment with all parties receiving series injury. I like how Daredevil's suit was regularly ripped and how many times he needed stitches and couldn't even get up or walk after a few fights. It made the world feel that much more believable and the stakes that much higher.

Kingpin. The Kingpin isn't introduced until the end of the third episode. Before that he is a voice on a phone and a whispered mention. It was very effective technique to make his seem larger than life and a true menace, one that reminded me of Orson Welles in The Third Man. It's a shame they had to ruin it and actually show the character.

Rosario Dawson. It's nice to see how superheroes get patched up. If you really did go out there and fight crime, you're going to need stitches and bed rest. The nurse Rosario played was a really likeable character. The writers did an excellent job showing her struggle in deciding to help Daredevil even though the idea is ludicrous. There was really chemistry between her and the title character, which the series needed.


Ben Urich. I've never been a fan of Ben Urich in the comics, and this show only made me dislike him more. He is the token "blackface" character Marvel puts into each of their projects (a white character cast as a black character for no reason other than to have another black character). And in this version he was an annoying old man that did little more than antagonize the main characters. He wasn't smart. He didn't do much investigating. He didn't break any big stories. He did little to move the plot along. The show could have worked just fine without him. I actually cheered when he died at the end, glad he wouldn't be returning.

Wilson Fisk. While the character was interesting and showed a lot of interesting backstory and emotion, he was portrayed as an emotionally damaged man controlled by his feelings and not his brain. He was his own worst enemy and did more to take down his empire than Daredevil. I never bought that he could run an empire or strategize to take over the criminal organizations in the city. And his sudden shift from good samaritan to thief along the road seemed contrived. He was much more interesting before we saw him. And his whole romance never made sense. We never saw why he was interested in Vanessa or her in him.

The Red Suit. While I appreciate the red suit made an appearance and Daredevil did more than just pose in it on a rooftop as the last scene, I was hoping they would introduce it earlier in the series so we could see him do more in it. That is until I saw it. It was a strange design with a really ugly mask that doesn't change the shape of Charlie Cox's head enough to make you believe it could hide his identity. The Ben Affleck suit form the movie was really a good look that was both true to the comic book and made sense in a practical world being based on biker gear. They should have stuck more closely to it.


While I thoroughly enjoyed the show, this is not at all the approach I would have taken with the series. I would have preferred a different art style. While I think Alex Maleev is a talented artist, I just don't dig his style. His run on Daredevil was my least favorite artistically. I would have preferred less yellow and more noir in the vein of Frank Miller's run or even John Romita Jr.'s style. And the casting was not at all how I imagine the characters, but they still made for an enjoyable ensemble.


Overall, I loved this series. It had me hooked from the first minute and didn't let me go until the last. I had originally planned to watch it over three days, but once I started I couldn't stop. The characters, the story, the acting, the action, the tight plot, and the faithfulness to the comics made this a true classic. I highly recommend this series and give it a solid 4.5 out of 5 remotes. 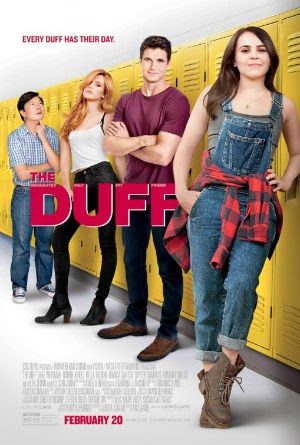 "The Duff poster" by Source. Licensed under Fair use via Wikipedia - http://en.wikipedia.org/wiki/File:The_Duff_poster.jpg#/media/File:The_Duff_poster.jpg
I enjoy a good teen-angst flick from time to time. Most of the time they are predictable with the same basic story and cast of cardboard-cutout characters, but that doesn't stop them from being entertaining.

The Duff is a 2015 teen-angst comedy/drama. It is rated PG-13 and is appropriate for teenagers and up due to language and content.


Bianca. Bianca is presented as the typical frumpy, chubby, unpopular girl who you know is going to get the hot jock at the end. Fortunately, the actress who plays her has so much personality that she actually becomes an interesting character from almost the beginning. I actually cared what happened to her.

Contemporary. This movie was more than just a remake of past teen-angst flicks. It really did look at the current high school situation and wrote the story around that. The use of social media and teachers hands off approach was very current. And the videos the villain posted looked like something a high school student would actually put together.

Comedy. This movie is funny and I found myself laughing quite a bit. It is a PG-13 so some will find some of the language and humor inappropriate, but nothing you wouldn't expect from this kind of movie.

Pacing. This movie is well paced and never seems to drag or move too quickly.


I'm OK, You're OK. This movie has an overly clear message that people are just right how they are and you shouldn't judge other or worry what others think about you. It's very much a product of its time. What's obnoxious is how the audience gets hit over the head repeatedly thru speech after speech. The message was clear without spelling it out, and yet the movie spells it out over and over again.

Too Nice. Everyone in the movie is too nice which takes away from the conflict and makes the main character's situation seem less severe and less sympathetic. Her two best friends are cute, popular girls who are very loyal and kind and give her access to the other popular kids at school. She's really not much of an outcast. The only really villain is the ex-girlfriend who is little more than a caricature of a mean girl with little substance. I'm sure it's just to push the message that everyone should be accepting of everyone else, but it isn't realistic and it is takes away from necessary conflict and drama.


I would have appreciated the producers to give the audience a little more credit and use a little subtly with the message. We got it. Even the stupid members of the audience got it.

I would also have liked to see more chemistry and conflict between the main two characters. We know what kind of movie this is, so we know they're going to start out not liking each other in the beginning but falling in love by the end. But they actually seemed to really like each other at the beginning so much that is seems strange they aren't dating. And when they do finally date, there isn't a lot of chemistry or romance you expect to see. It makes the end a little unsatisfying.


Overall, The Duff is an entertaining movie that follows the standard teen-angst formula but brings enough interesting characters and contemporary plot points to keep the audience entertained. The characters, while typical stereotypes for this kind of movie, have enough personality to make them interesting to watch and the audience care about them. I give it 4 out of 5 boxes of popcorn.