One Line Summary: "Transformers 4 felt like a low budget scifi flick from the 50s where some terrible threat from outer space crashes near a town, the army is called out to fight it, and the cast over acts leaving no question why they only appear in B flicks." 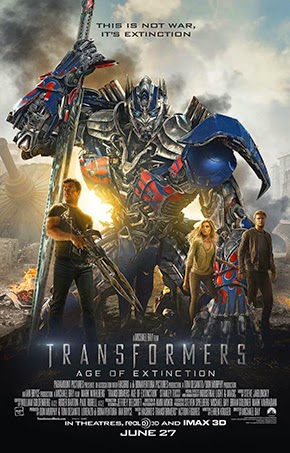 I've been a Transformers fan since I first saw the cartoon in the 80s. What's not to love about transforming robots fighting a battle across the vastness of space? I especially loved the Dinobots, so when I heard they would appear in this movie, I was pretty excited.

Transformers 4: Age of Extinction is a 2 1/2 hour science fiction/action/monster movie based on the Hasbro toys from the 1980s. It is rated PG-13 for violence and language and is appropriate for teenagers and up.


Dinobots. I really like how the Dinobots were portrayed. The designs were definitely cool with a nice balance between the originals and the movie look.

Mythology. I really like how the Transformers mythology was further explored by hinting at their origins and setting up a sequel to find the "creators".

The Truth. We learn the truth of how the dinosaurs went extinct. And here you probably thought it was an asteroid. Nope. Invaders from space.


Dinobots. I know, I included Dinobots in the The Good, so what the heck am I doing mentioning them again under The Bad? While they were really cool, they were not introduced until the end, they just appeared with the barest of explanation of where they came from, and they did little more than mindlessly battle the bad guys. There was no real development of the individual robots. This really cool concept was wasted and could have been so much more.

Pacing. This movie suffered from poor pacing. The first hour was a lot of slow exposition setting up the bad guys: evil big business conspiring with the corrupt government to make big profits while the White House sits clueless to what is going on (a very realistic portrayal); and the heroes: poor average citizens who have been kicked around in life. It was very cliched and boring. The next half hour introduces the new bit of mythology, which was really entertaining. The last hour was a series of four action scenes that eventually result in the good guys triumphing over the bad guys.

Action. All four action scenes felt the same length and level of intensity. The movie felt really long, and the director could have easily cut out two of them since all four were pretty superfluous and led no where until the very end. After watching the last three movies, this brought nothing new in terms of special effects.

Characters. Just like the 50s flicks this reminded me of, the characters were very shallow, cliched, and uninteresting and all of them over act. I feel like I've seen the poor struggling father and the daughter trying to escape and start a life of her own with her secret boyfriend waaaaaay too many times. And the evil businessman conspiring with corrupt government? I just need to turn on the news to see that. Couldn't they have come up with something a little more original or creative? I mean, seriously, we're talking about giant transforming robots and dinosaurs--how do you mess THAT up?


I wish they would have spent more time on the Dinobots and shown a more interesting origin for them than mere prisoners on a ship. They could have connected it to the opening scene when the dinosaurs were wiped out.


This movie is a typical Michael Bay film with over-the-top visuals and so much intense action it becomes boring. Overall the movie was entertaining and worth watching once. I like the new additions to the mythology and hope they explore those in the next movie. I give it a 3 out of 5 boxes of popcorn.