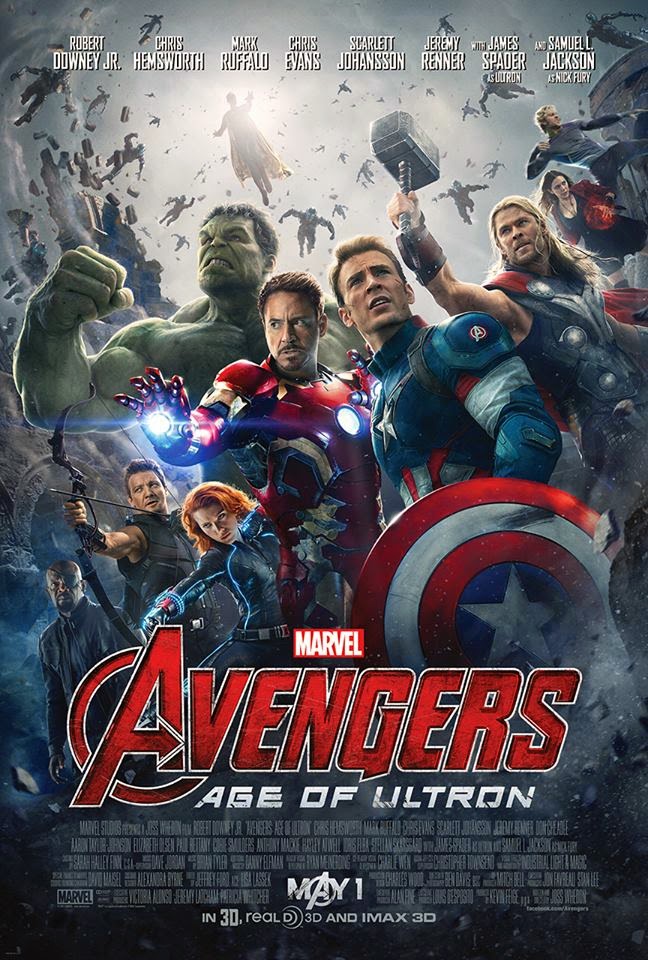 From the day I saw the first trailer for Iron Man, I've been a big fan of Marvel movies. For a while each movie was a classic, but I knew that couldn't last and the day would come where they started to get old. That day has come.

Avengers: Age of Ultron is a 2015 live-action, action, comedy, science fiction, superhero film based on the Marvel Comics characters. It's rated PG-13 for language and violence. It's appropriate for most audiences.


The Cast. This movie features the characters we've grown to love including Captain America, Iron Man, Thor, Black Widow, the Incredible Hulk, Hawkeye, and a few characters we don't care so much about. I appreciated how most of the characters from previous films were included such as Falcon, War Hammer, and the like.

Comedy. This movie cracks jokes from the first scene to the last, and they are funny, witty, and make reference to the things we've seen and loved about previous films. Fanboys will be thrilled. The humor is a perfect 10.

Contest to Lift Thor's Hammer. This was the best scene of the whole movie. I won't spoil it for you, but Captain America shows he really is worthy.


Quicksilver and Scarlet Witch. I'm not sure why these characters were included, because they weren't that interesting and could have easily been cut out of the movie. The portrayal of Quicksilver in X-Men: Days of Future Past was so cool I was really excited to see him in this movie. Unfortunately they went a completely different direction with the character turning him into a boring, unlikable, generic blah. He and his sister weren't even mutants but genetic experiments. And they didn't appear long enough to see any real development. Considering how unlikable they were, that is probably a good thing.

Lack of Iconic Scenes. Marvel Comics has a rich history of cool scenes and iconic moments, and the Marvel movies so far have done an excellent job of capturing those and reinterpreting them. This one had no such memorable moments or scenes aside from the Thor's Hammer lifting contest.

Action. The action in this movie looked like a video game, and not the latest and greatest game. The scenes were shot from strange angles a physical camera would never see with characters moving in very unnatural and awkward ways like they were cgi rigs. Up until now, I've been impressed with how realistic and believable the action scenes were in the movies. I believed they could actually happen. I didn't with the action and stunts in this movie.

Story. The story was pretty thin and basically an excuse to travel around the world and have a lot of fight scenes, which gets old fast.

Pacing. This movie drags in several places. I actually found myself getting bored and checking my watch. The first movie was so tight that I was really disappointed that this one wasn't.


I really wish they would have chosen a stronger story. The characters are so cool, so memorable, so likable that I really want to see them do something other than fight. I love a good fight scene, but that's not enough to hold my interest for an entire movie. Where is the drama? Where is the character interaction? Aside from a few jokes during the first half hour we just don't see their personalities coming out. Where is the development? The characters are basically the same at the end of the movie as they are at the beginning. So many missed opportunities.


Overall, Avengers: Age of Ultron is your typical, over-the-top action movie lacking the classic scenes of other Marvel movies. The one highlight was the dialogue and humor which was clever, funny, and directed towards the hardcore fans. Otherwise it is just another action movie that will look very dated in a few years. I give it 3 boxes of popcorn out of 5.