Movie Review: The Space Between Us 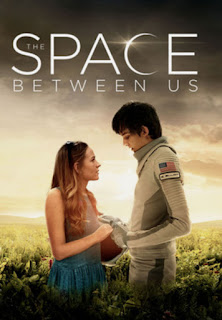 I rarely watch romantic dramas, but every once in a while one looks like it might be something I'd enjoy. I usually wait for it to come out on DVD so I can watch it at double speed and not waste too much of my time if it disappoints.

The Space Between Us is a 2017 romantic, science fiction drama. It is rated PG-13 for language and sensuality but is appropriate for tweens and up.


While traveling to Mars, an astronaut finds out she is pregnant. Her son is born on Mars. Because of the difference in gravity, he can't safely come to Earth, yet falls in love with a girl on Earth over the Internet and travels to see her. Drama ensues.


Main Characters and their Chemistry. The main two characters are fairly interesting, and they have good chemistry. That is what makes this film enjoyable. Everything else is pretty clichéd and stock.
Straightforward Storytelling. I appreciate how this movie gets out of the way and lets the story unroll. It was a smart move, because the story was solid and the actors did a good job.

Slow. Because the movie is predictable and goes exactly where you expect it to go, it feels a little long and slow. Editing this down to a 90 minute flick would have helped pacing.

Big Reveal. The big reveal at the end is so obvious that is almost seems silly and melodramatic when they finally get around to it.


I wish there had been more to this film. It's exactly what you expect it to be, which was a little disappointing.


The Space Between Us is an enjoyable romantic drama that is well told but very predictable and plays out exactly how you expect it to. The actors do a great job and have good chemistry and are the strong point of the movie with everything else being lackluster and mediocre. I give this movie 3.5 boxes of popcorn out of 5. 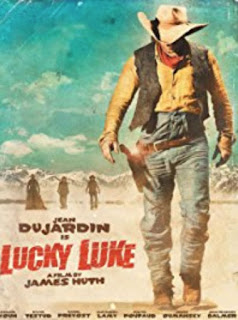 European comics have been around for decades but haven't made much of an impact on American readers despite the quality art, writing, and stories other than Peyo's Smurfs. But I enjoy reading them and watching foreign adaptions even if they have a different sensibility than American audiences are used to.

Lucky Luke is a 2019 romantic, comedy, action, foreign film starring Jean Dujardin (from the recent silent film The Artist) based on the European comics of the same name. It is unrated but is appropriate for tweens and up.


Lucky Luke is an expert gunsman who is quicker than his own shadow and lives in a fantasized version of the American West battling scoundrels and other villains.


Capturing the Tone of the Comic. The comic book is what Cartoon Network would call a "cartoon cartoon" with squat, cartoony proportions and silly gags that would never work in real life. The filmmakers did a great job bringing that surreal comedy and nonsense to life in a way that was fun, silly, yet believable enough that it didn't distract from the drama or tension. The only other movie to really capture a comic strip and put it on screen was Warren Beatty's Dick Tracy. The movie even manages to include a lot of different characters and incidents from the dozens of adventures. 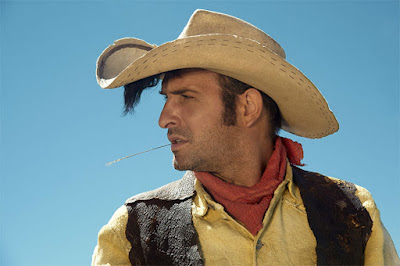 Lucky Luke. Jean Dujardin perfectly captured the look and feel of Lucky Luke as well as created an interesting character someone who's never read the comic will like.
Action. The first third and last third move along at a great pace and are filled with a lot of fun, surreal action/comedy that is a joy to watch.


'Lost His Powers' cliché. The reason superheroes are popular is because of their superpowers. Take those away, and they are pretty uninteresting characters. And yet writers and filmmakers love to do that: Flash loses his super speed; Green Lantern loses his ring; Superman loses his super powers; Spider-man runs out of web fluid for his webshooters. It's not interesting, and the middle third of this movie had Lucky Luke lose his luck and will to live. He is a mopey cowboy no different than any other mopey cowboy. It almost ruined the movie it dragged on for so long and was so boring. 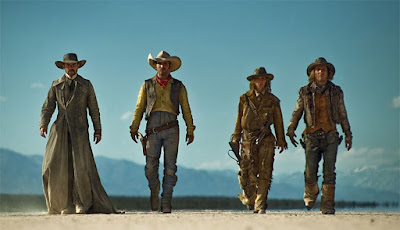 
I wish they had skipped the middle where Lucky Luke lost his luck, or at lest shortened it considerably. It was SO BORING. This movie would have gotten 5 boxes of popcorn if the filmmakers hadn't forced me to watch that.


Lucky Luke is a fun western flick filled with surreal action and comedy straight out of the comic. The middle third is deadly boring when Lucky Luke loses his luck, but the beginning and end are so fun, enjoyable, and well done that it's worth sitting thru. I give this movie 4 boxes of popcorn out of 5. 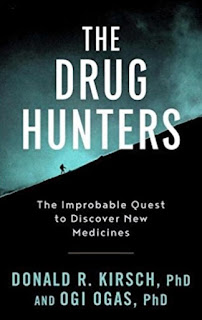 A lot of people hate "Big Pharma" calling them the devil and blaming them and their greed for so much of society's woes. If you know nothing other than the price of your medications, I can see how you might mistakenly think that. But if you understand the realities of business and the process of developing new drugs, you can't help but change your attitude.

The Drug Hunters The Improbable Quest to Discover New Medicines by Donald R. Kirsch and Ogi Ogas is a history of the development of the drug industry and a look behind the scenes at why it is the way it is including the high costs and the reason cures for certain diseases and other treatments haven't been developed.


Great History. This book begins with early prehistoric man using herbs and plants for their medicinal value and follows the development of this branch of science to the present day. It covers each era in good detail describing what happened, why, what influenced it, what were the results, and who some of the major players were. It was incredibly informative.

Good Detail and Explanation. This book has a lot of information and a lot of science, but it is mostly digestible for the educated reader. I appreciate the authors didn't dumb anything down, although they weren't very skilled at making science accessible to the average reader and would have benefitted from an additional co-author.


Cultural / Historical References. The authors make several pop culture references and historical parallels that aren't exactly correct. Steve Jobs did not invent the iPhone, and it was as much of a happy accidental convergence at the birth control pill.

Author Bias. The authors make it very clear they are devoted followers of the mainstream media and think that's the only educated course of action. At the beginning they offer a completely reasonable explanation to why plants and animals contain helpful substances for humans, but completely dismiss it for the rest of the book, because they can't entertain the idea there may actually be a guiding force behind the creation of this planet.


I wish the authors had been a little more educated on history outside of their field so their examples and cultural references hadn't been so glaringly incorrect. It made them less credible and made me question if their other information might also be inaccurate.


The Drug Hunters The Improbable Quest to Discover New Medicines by Donald R. Kirsch and Ogi Ogas is a fascinating look at the history of the drug industry, how it works, and why it does what it does, and why it develops or doesn't develop what it does. The authors work in the industry, so they have a lot of first hand knowledge on the specifics. They doesn't seem to have spent much time learning anything else, because their incorrect references to pop culture and other history make made them less credible and make the reader question if their other information might also be inaccurate. I give this book 4.5 out of 5 eReaders.

Book Review - Destiny of the Republic: A Tale of Madness, Medicine and the Murder of a President by Candice Millard 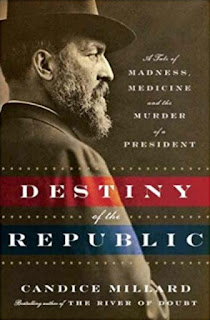 James Garfield is largely forgotten today because of his short time in the White House, but in his lifetime he made quite a contribution. I only became aware of him when I visited Mentor, Ohio and saw the museum dedicated to him.

Destiny of the Republic: A Tale of Madness, Medicine and the Murder of a President by Candice Millard is a biography of James Garfield, 20th President of the United States.


Well Written. This book flows very well. The words don't get in the way, it moves at an entertaining pace, the events are well described, and the information is complete so the reader isn't left wondering about anything.
History. This book deals with a period of history between the Civil War and the beginning of the 20th Century, a period that is rarely written about or explored. There were a lot of important figures, events, and discoveries in this period that were fascinating to read about. That alone makes this book worth reading.


Not Dramatic. Often the historical figures and events that get written about do something extraordinary or spectacular in a flashy sort of way that makes one go wow. James Garfield was a great man who did great things, but they were more low key things and not so flashy. If you read many biographies, this one may feel a little anti-climatic because of the smaller more subtle ways James Garfield affected history instead of some dramatic turn in the course of events.


The anti-captial punishment rant at the end was annoying and out of place. Otherwise this book covered the topic well and in an interesting way.


Destiny of the Republic: A Tale of Madness, Medicine and the Murder of a President is a well-written biography about a great man whose contribution to history was more subtle and is largely forgotten today. His accomplishments aren't as dramatic as those of others most people read about, but important nonetheless. This book deals with a period of history between the Civil War and the beginning of the 20th Century, a period that is rarely written about or explored. There were a lot of important figures, events, and discoveries in this period that were fascinating to read about. That alone makes this book worth reading. I give this book 4 out of 5 eReaders.