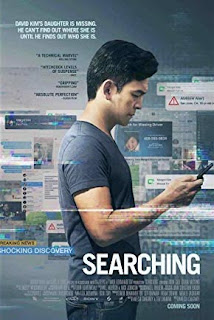 I heard about this movie and thought the concept was unique, but I wondered how could they sustain an interesting story without ever leaving a computer screen?

Searching is a 2018 thriller drama. It is rated PG-13 for language and intensity, but is appropriate for tweens and up.


The Concept. This entire movie takes place on a computer screen, usually the father's laptop, but other screens, including security camera footage, is used. It's a really unique way to tell a story, and the filmmakers pulled it off. Everything made sense. Everything worked.

The Story. The story was amazing. I was hooked from about five minutes into the film. It moved quickly, yet never became confusing. I really felt for all of the characters. There were twists and turns I didn't see coming. I was at the edge of my seat until the end.

The Twists. I'm really good at predicting "twists" in movies. Most murder mysteries I know who it is from the first introduction of the guilty party. But this movie had twists I didn't even know where coming, let alone know what they were.

The Relevance. This movie is very much a 2018 movie with the social media platforms, but I think it will age well, because the real heart of the story is about a father who discovers he doesn't know his daughter and is shocked by his search to discover her. That is a timeless story that will reverberate throughout the ages.


Searching is one of the best movies I have ever seen. The concept of using only a computer screen to tell the story was brave but so well executed. The story was solid, exciting, and kept me at the edge of my seat. The twists were so unexpected and truly surprising. The heart of the story, a father learning he doesn't really know his daughter and is surprised by the revelations he uncovers is timeless and powerful. I give this film a solid 5 out of 5 Boxes of Popcorn. 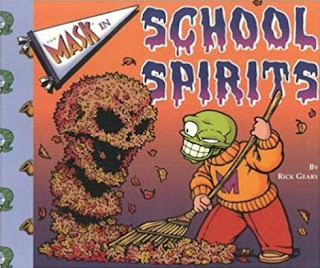 I never saw The Mask movie until nearly two decades after it came out, but I watched the cartoon every Saturday and thought it was great.

The Mask: School Spirits by Rick Geary is a story of The Mask disguised as a children's storybook appropriate for all ages (even adults will enjoy it). It is available in Hardcover and is one of three volumes.


The Art. Rick Geary isn't the best artist, but he perfectly captures the look and feel of The Mask and his zany adventures.

Fun This story isn't the most original, but it sure is a lot of fun.

Characters. The characters will remind you of people you've met and probably went to school with. While they aren't super original or fully fleshed out, they are developed enough that you get into the story

Obvious. From the plot to the concept to the twists, this is not the cleverest nor the most original story I've read. Everything I saw coming from the beginning, and nothing surprised me.


I wish the story had been more clever and The Mask had done more zany things that would have been fun to read about and look at.


The Mask: School Spirits by Rick Geary is a graphic novel disguised as a children's storybook from Dark Horse Comics. It's a lot of fun with solid art and a solid story that is appropriate for all ages. Even adults will find something to like in it. It's not the most original story, and the twist at the end is very obvious. The Mask also isn't as zany and one would like. But it's still an enjoyable read. I give this book 4 out of 5 eReaders.

Book Review - Will Eisner's The Spirit: The New Adventures HC 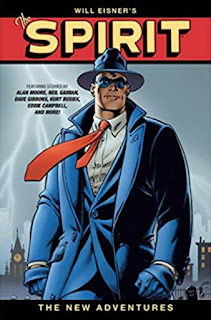 I was late boarding The Spirit train. I was aware of the character, but never had any real interest in him until the Frank Miller film. Despite popular opinion, I loved it and have watched it dozens of times. I purchased a trade paperback of Spirit stories and loved those. That lead me to purchase one of DC's Archive Editions. I was so disappointed by it, I didn't pick up another Spirit story. Until Things From Another World had an incredible sale...

Will Eisner's The Spirit: The New Adventures is a collection of Spirit stories published by Kitchen Sink Press that weren't written or illustrated by Will Eisner. It is available in Hardcover.


The Most Important Meal. This takes place during the last supper of one of The Spirit's greatest foes talking to another of his greatest foes. It's an interesting variation on the origin of the characters. It's by Allan Moore and Dave Gibbons, two people whose work I don't normally enjoy, but they knocked this trilogy of stories out of the ballpark.

Force of Arms. This is another story that plays with the origins of the characters, especially the Spirit's archfoe.

Gossip and Gertrude Granch. This is the third in a trilogy of origin stories that explores the fate of a minor character.

The Return of Mink Stole. This is very meta about screenwriting for movies.

Sunday in the Park with St. George. The art is atrocious, but the story is a lot of fun if not a little too convenient.

Sphinx the Jinx in The Game of Life. This is a high concept story that feels like it came from Will Eisner's newspaper work. Probably the most "classic" of the collection.

Ellen's Stalker. This feels very much like The Spirit newspaper strips, but not as concise and clever.

Cursed Beauty. This had an interesting twist, but the way it dealt with racism was very bland and overdone. It didn't feel like the writer really understood what he was talking about.

Swami Vashtibubu. The art was lousy, but the twist was interesting.

The Pacifist. The story was fine, but the concept was pretty strong, and reminded me a lot of the Rat-a-Tat story from the newspaper comics.

Sweetheart. This was one of the strongest stories from an original concept to strong art, to a tight plot, to a twist I didn't see coming.

Black Opal. This story wasn't in the original comic book series (probably because it was cancelled) but has great art and a pretty decent story.

Last Night I Dreamed of Dr. Cobra. This is clever, but miserable to read. It reminds me of 2001: A Space Odyssey--it's a wonder of technical achievement but a complete failure in entertainment.

The Samovar of Shooshinpoor. This isn't a bad story, but the art is amateurish and the story very ordinary.

The Weapon. This was really boring, generic, and obvious.

Baby Eichbergh. The concept wasn't bad, but it was so dully executed I just couldn't care about the baby and what happened to him.

Golf Anyone? The concept wasn't that strong, and the execution did nothing to help it out.

The Ghost of Tiger Traps. The concept and plot were both really weak. And the art by Paul Pope was nowhere near his usual level.

Binding. This book looks beautiful, but started to fall apart on my second read thru.


Will Eisner's The Spirit: The New Adventures is a mixed bag that contains classic stories I have read and reread numerous times as well as stories I can't believe they wasted paper to draw and then print. But despite the less than stelar stories, each one was so different and unique and most attempted something pretty wonderful, so I give this book 5 out of 5 eReaders.