Movie Review: The Book of Life 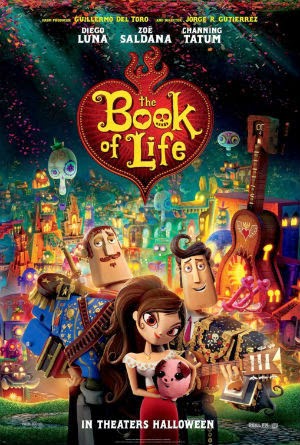 I'm always up for a good Halloween flick. I think the ghosts and goblins and witches and skeletons are lots of fun. I detest anything mexican, because it always tends to be really boring and the same thing over and over, but The Book of Life was a pleasant surprise.

The Book of Life is a 2014 computer-generated, animated, comedy, romance, family movie based on the Day of the Dead from producer Guillermo del Toro, the director behind Hellboy, Hellboy II: The Golden Army, and Pacific Rim. It's appropriate for all ages.


The Visuals. The Visuals were stunning! From the colors to the scenery to the costumes, everything was a visual feast to behold. The figures were designed to look like hand-carved wooden puppets which fit the culture behind the film.

The Characters. The characters were fun and interesting, especially, Manolo and Joaquín, both suitors for the hand of the beautiful María. Manolo is a musician from a family of bull fighters, and Joaquín is a soldier from a family of fighters. They're a little cliched but still fun enough to be likable. The main supernatural characters, one representing good (La Muerte) and the other evil (Xibalba), were beautifully designed and had enough character to make them interesting.

The Story. The movie begins with a field trip to a museum that is used as a framing sequence for the movie with a set of wooden puppets of the characters as a nod to the style used. The museum tour guide acts as narrator with a few breaks back to the framing sequence for dramatic effect. The pace moves quickly enough that the story never drags but never too quickly to enjoy what's going on or develop the story.

The Action. This movie had of lot of quality action scenes from the multiple bull fighting sequences to the multiple battles with the bandits.

Family. This movie had a strong message for family and families working together but wasn't preachy about it, which you almost never see nowadays. It was a refreshing change.


Old Jokes. Most movies in this genre are clever and witty with a lot of original jokes and winks to pop culture. This had none of that. Everything was cliched and recycled from other shows.

María. María is the cliched pretty girl that is strong willed and skilled in fighing. There is nothing new or original about her, and one has to wonder why two cool dudes like Manolo and Joaquín would want her after they get old enough to know better.

Villain's Change of Heart. The main villain has a change of heart at the end (no surprise there), but there seems to be no reason or motivation for it. He just suddenly goes from bad to good because it's convenient for the plot.


I really would have enjoyed original jokes and witty dialogue. This one had funny jokes--20 years ago. I was really surprised that they recycled old jokes that aren't funny anymore and witty twists that have been done enough times to make them not witty anymore. I guess that fits with the whole mexican culture it's based on--nothing new and lots of the same thing over and over.


Overall I was thoroughly entertained by this movie. It was a visual treat with great characters (for the most part) and a story that was fun to watch. None of the twists or surprises were surprising but they weren't so cliched they were boring either. The message of families helping each other was well portrayed without being preachy and a nice change from other films and shows. I give it a solid 4 out of 5 boxes of popcorn.