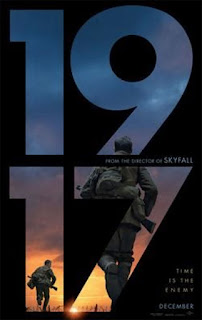 I have a great interest in The Great War, The War to End All Wars (if only it had), so I was curious to watch the latest flick about that time. The trailer looked okay, but it was the overwhelmingly positive reviews from nearly everyone that really got me excited to see this film. But would it deliver?

1917 is a 2019 action war film. It is rated R for language, violence, and harsh images, and is appropriate for adults.


Cinematography. This movie was very well shot with it looking like it is nearly one continuous shot. The way the camera moves and captures the scenes makes you feel like you are in the middle of the war with the main characters. Unlike so many modern films, this one lets the camera step back and see the scene around so you can enjoy the great environments instead of pushing the camera in everyone's face so you feel like you are in tight quarters and can't really see anything.

Variety. This movie had a lot of variety in setting, in action, in peril, and everything else. I was kind of afraid I'd get bored with the same soldiers walking thru No Man's Land for two hours, but there were scenes in rivers, towns, grassy fields, trenches, underground, in the day, at night, and more.

Not Gratuitous. The Great War was a horrendous affair filled with scenes that could give anyone nightmares. The filmmakers really held back the gristly imagery showing only what was necessary for the story and no more. I appreciated that. I was afraid I was going to be sick if I saw this film.

Surprise. Most of this film is what you expect, but there was a shocking surprise in the film that wasn't even hinted at in any of the trailers, ads, or reviews and it occurred at a very unexpected time. I'm amazed with as much as had been said about this film, no one let this cat out of the bag.


Peril and Suspense. There was real peril and real suspense in this film, but not as much as I would have thought, and I was fairly comfortable the whole time and almost never at the edge of my seat. They could have ramped up the peril and danger just a little bit.


Put me on the edge of my seat more.


1917 has been called a near perfect movie and a cinematic masterpiece, and that praise isn't much of an exaggeration. This is an excellent film filled with amazing visuals, a unique storytelling device with the "uninterrupted shot for the whole movie", and a variety of action and peril. Being a Great War flick, this could have easily turned into a horror fest, but the filmmakers kept the gristly visuals to a minimum only showing a few necessary images to convey the proper mood. The story is good and the pacing, while a little slow in parts, mostly keeps moving. I give this film 4.5 out of 5 Boxes of Popcorn. 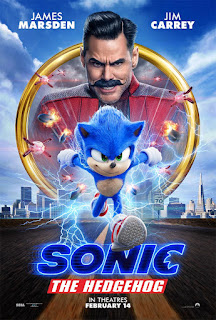 I love classic video games and think they could make great movies and TV shows if someone would just do it right. Someone? Anyone?

Sonic the Hedgehog is a 2020 action comedy film based on the Sega video game of the same name. It is rated PG and is appropriate for teens and up.


Solid Story. The story is fairly simple and straightforward, but for this kind of movie and the younger audience it's targeted to, that's okay. It's solid, logical, and for the most part makes sense even if it's not the most compelling or original.

Action. The action was great! It was fun, fast, and lots of it. It did a good job mimicking the action and feel of the video game.

Comedy. This film had some pretty good jokes, although most of them were aimed at and would only be appreciated by a younger audience.


Young Audience. This film is definitely aimed at a younger audience and feels a little juvenile with much of it talking down to the audience, which was unnecessary. The core audience will be adults who were kids when Sonic came out on the Sega who loved the game and are adults now with a lot of nostalgia. There's no reason it couldn't have been a little more intelligent and appeal to all ages.


I wish this film hadn't been mainly targeted at a young audience, but instead had something for all ages.


Sonic the Hedgehog is an entertaining flick with great action and visuals and a few pretty funny jokes. The main characters are likeable and do a good job. The story is solid. The main flaw is the movie is targeted for a young audience with a overly simple story and many jokes only youngsters would laugh at. The core audience will be adults who were kids when Sonic came out on the Sega who loved the game and are adults now with a lot of nostalgia. There's no reason it couldn't have been a little more intelligent and appeal to all ages, especially considering that is the trend right now. I give this film 4 out of 5 Boxes of Popcorn.