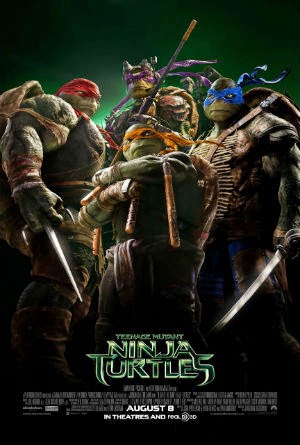 I've been a Ninja Turtle fan since I first saw the cartoon and the toys in the store in the 80s. What a fun, fresh, yet classic concept. Eastman and Laird wrote and drew some memorable issues, and the Fred Wolf cartoon and toy line made them legendary by introducing elements that are still considered canon today. Nickelodeon bought the rights to the characters and has relaunched them as a successful new comic book series published by IDW that takes a fresh approach to the mythology while including and paying tribute to all previous incarnations, a cgi television series that's less successful, and a movie that won't be causing anyone to wax nostalgic in twenty years.

Teenage Mutant Ninja Turtles is a two hour action, science fiction show that attempts to reboot the franchise. There is action, mild language, and intense, over-the-top stunts that is appropriated for tweens and up.


Plot. The movie actually had a pretty tight, linear plot that was easy to follow and yet interesting enough to keep one from getting board.

Pacing. The movie moved at a nice pace and never seemed to drag or move too quickly.

Vern. Vern is the comic relief, but unlike the typical stereotype appearing in most movies, he is fairly intelligent, brave, and competent. It was a refreshing change from the usual dopey, screw up klutz we see in most movies.

Character Designs. The character designs of the Turtles were actually pretty nice and worked well on the big screen. They were different enough from anything that's come before to feel unique, and yet still retained enough of the classic look to not alienate long-time fans.


Characterization. Other than Michelangelo, everyone was very flat character wise and uninteresting. No one had much personality. A mad scientist who was a trusted childhood friend is the bad guy, and he was one of the more interesting characters.

Origin. They made changes to the origin following the IDW comic book series' take, but forgot to include the reincarnation that made it work. It really made the Turtles feel less special and purposeless.

The Shredder. The Shredder basically looked like a giant Transformer, had no personality, and was little more than a hired good for the evil scientist mastermind. I've never seen this character interpreted so weakly. The Shredder is supposed to be a brilliant yet ruthless leader. Not here. He's the obedient muscle with no strategy. And that armor was ridiculous, even for a Michael Bay movie.

The Ending. The ending was so over-the-top and silly that there was no sense of peril. I understand wanting something big, but you have to have some credibility, some believability to make the audience feel, and it just wasn't there. The Turtles saved the day so easily with no real sense of peril that the victory felt very hollow and meaningless.


The new Ninja Turtles movie is no classic, but the plot was pretty tight and the movie enjoyable enough that is isn't a waste of time either. This movie won't be causing anyone to wax nostalgic in twenty years. You'd be well advised to wait for it to come on TV or wait for your roommate to rent it. I give it three boxes of popcorn out of five.