Book Review - Good Strategy Bad Strategy: The Difference and Why It Matters by Richard Rumelt 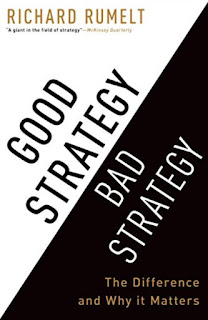 I'm a big fan of what I call "business books" -- nonfiction books that discuss various topics that can help a business or manager or entrepreneur. After reading a couple dozen so books, they start to repeat themselves and offer very little new. But then I discovered this gem.

Good Strategy Bad Strategy: The Difference and Why It Matters by Richard Rumelt is a nonfiction business book on strategy. It is available as en eBook, Audiobook, and those paper things your grandparents used to read.


Defining Strategy. This book does an excellent job defining what strategy is and isn't, and spends a good deal of time going over several popular corporate "strategies" and government "strategies" that aren't actually strategies and explains why they aren't.

Case Studies. This book offers many great real world case studies of companies with and without strategy as well as good and bad strategies and the results.

No Political Agenda. The author kept his politics to himself. I was especially surprised when he offered nuclear power as the only solution to energy independence even though that is very unpopular politically these days.


Narration. I listened to this as an audiobook, and the narration was very poor. It wasn't so poor it made the book unlistenable, but it didn't do the text any favors.


I would like to have seen more examples of good strategy.


Good Strategy Bad Strategy: The Difference and Why It Matters by Richard Rumelt is an excellent book that explores what strategy is and isn't, provides numerous real world examples of corporate and government strategies that aren't actually strategies but goals and mission statements, provides many examples of good and bad strategies and explains why they are good or bad, and explains why the latest financial crisis happened, why previous financial crisis happened for the same reasons, and why future financial crisis are going to continue to happen. And the author manages to keep his politics to himself. I give this book 4.5 out of 5 eReaders. 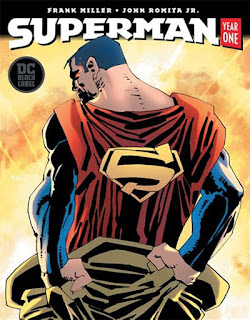 Despite all the backlash Frank Miller gets these days, I still think he is a good writer. He comes up with some really great stories, and they always focus on the emotions of the characters. So when I heard he was tackling a Superman story, I was excited.

Superman: Year One 1 is the first book in a trilogy of graphic novels featuring Superman. It is available in paperback and electronic comics.


Story. This book had a great story that moved at just the right pace. It felt like classic Superboy in Smallville and yet modern at the same time. It was true to the Superman mythos while bringing something new to the picture.

Art. The art was very nice and fit the story Frank was telling.

Changes. This story made several changes to the Superman mythos that all made sense and provide a lot of interesting stories to explore.


Matt Murdock. Frank Miller has made Clark Kent act like and talk a little like Matt Murdock in the Man Without Fear mini-series. While that is one of my favorite stories of all time, this felt a bit like a rip off of that. I'm not sure Clark and Matt are really that similar.


I wish Frank had made Superman's mom more human and less of a plot device.


Superman: Year One 1 had a great story that moved at just the right pace. It felt like classic Superboy in Smallville and yet modern at the same time. It was true to the Superman mythos while bringing something new to the picture. The art fit the story, and I like how young Clark looks like Tom Welling from Smallville. This story made several changes to the Superman mythos that all made sense and provide a lot of interesting stories to explore. I just wish Clark's mother had been less generic helicopter mom and more Martha Kent. I give this book 4.5 out of 5 eReaders. 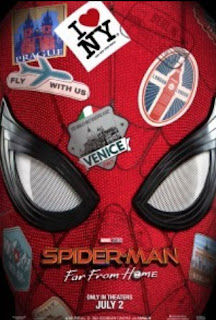 I thought Spider-man's cameo in Captain America: Civil War was a lot of fun, but I did not enjoy Spider-man: Homecoming at all. So I wasn't sure what I would think of this latest film. But it featured Mysterio, one of my favorite villains, and Jake Gyllenhaal, an incredible actor, so I thought it had potential.

Spider-man: Far From Home is a 2019 live action superhero film set in the Marvel Cinematic Universe featuring characters created by Stan Lee and Steve Ditko. It is rated PG-13 for action and language but is appropriate for all ages.


Mysterio. Mysterio is one of my favorite villains, and Jake Gyllenhaal did an amazing job portraying him. I really enjoyed the unique take the filmmakers took with the villain. He still stayed true to his roots and basic concept while still feeling fresh and new.

Comedy. This movie was filled with great jokes and comedy bits that flowed naturally from the narrative and helped advance the story and themes.

Final Fight. The final fight was amazing. It was fun, it was exciting, it was suspenseful, and there were a couple of surprises.

Relationships. This movie focused a lot more on the relationships between characters than previous films, and they were enjoyable to explore. They made the danger feel more real, because now there were real stakes involved.


Stunts/Special Effects. During much of the movie, Spider-man looks like he's being thrown around on the end of a cable (which he is). The stuntman does a terrible job making it look like Spider-man could actually do the jumps and leaps on his own. And this isn't the best cgi in a movie.

First Two Fights. While the final fight is incredible, the earlier fights are really disappointing. They just don't feel as exciting as they should.

Mid-credits Scene. While the mid-credit scene was a complete surprise (you will never guess what it is) and completely shocking, I'm not sure I like where it points the next movie.


I wish the earlier fight scenes had been better.


Spider-man: Far From Home was one of the best Marvel films to come out in a long time. Mysterio was a great villain portrayed perfectly by Jake Gyllenhaal. The filmmakers stayed true to the basic concept of Mysterio while delivering a really unique and amazing take on the character. The comedy was hilarious and flowed naturally from the narrative and situations. The end fight scene was as good and intense as it gets. This movie focused a lot more on relationships than the previous films, and they were well developed and interesting to watch. I give this film 4.5 out of 5 Boxes of Popcorn.