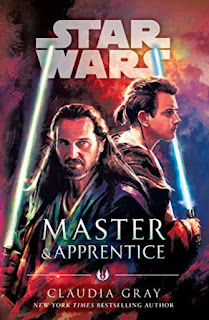 Unlike a lot of people, I really enjoyed The Phantom Menace. Qui-Gon Jinn quickly became one of my favorite characters, and I've really wanted to see more about him.

Star Wars: Master & Apprentice by Claudia Gray tells the story of an early adventure of Qui-Gon Jinn and Obi-Wan Kenobi. It is available as an eBook, Audiobook, and one of those paper things your grandparents used to read.


Story. This book had a solid story that felt like Star Wars. The mystery was intriguing, the action exciting, and the politics not tired.

Twist. This book had quite a twist at the end that I did not see coming.

Jedi Council Angle. This novel has an offer from the Jedi Council to Qui-gon to join it. This really doesn't fit in with the comment from The Phantom Menace about Qui-gon being on the council if he weren't so rebellious.


I with the narrator had put a little more excitement in his voice.


Star Wars: Master & Apprentice by Claudia Gray is a great novel I couldn't put down. The novel tells an early adventure of Qui-Gon Jinn and Obi-Wan Kenobi and explores their relationship. The story was solid. The characters were true to the film. The new characters felt like they belonged in the Star Wars Universe. There was a twist at the end I didn't see coming. I give this book 4.5 out of 5 eReaders. 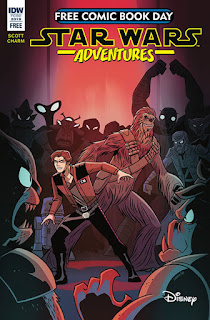 I've been a huge Star Wars fan my whole life, (although the latest trilogy is making me rethink that). I've bought Star Wars comics in the past, but have almost always been disappointed (with the exception of the brilliant Star Wars: Clone Wars in the Genndy Tartakovsky style).

Star Wars Adventures (Free Comic Book Day 2019) is an all-ages comic published by IDW that focuses on an early adventure of Han Solo and Chewbacca.

Fun. This comic was so much fun to read from the first panel to the last. I didn't experience a single moment or boredom or wanting to do something else.

All Ages. This comic was truly for all ages. I thoroughly enjoyed it as an adult and would change nothing and felt like I was missing nothing, and yet I'd have no qualms about giving this to a youngster and I'm positive he would enjoy it as much as I did.


Star Wars Adventures (Free Comic Book Day 2019) is everything a comic book should be: a complete story that is fun from page one to the end and is enjoyable and appropriate for ages 5 to 500. I was thoroughly entertained from page one to the last and didn't feel it lacked anything. I give this book 5 out of 5 eReaders.