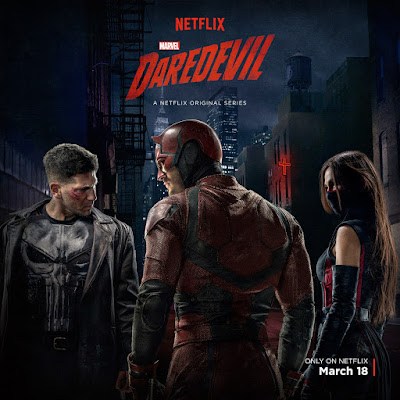 I've been not so patiently waiting for the second season of Daredevil, at times wondering if it would ever come. I was a little nervous--actually A LOT nervous. I mean, how often does a sequel live up to the hype and expectations created by the original? And what about the new characters? I'm not a big punisher fan, and I've seen Elektra done both well and about as far from well as one can get. So how would this new season stack up? Fortunately all my fears were for not and my expectations shattered.

Daredevil is a 2016 Netflix original series from Marvel Studios. It is a 13-episode action drama about a blind lawyer with uncanny abilities and mad fighting skills based on the comic book published by Marvel Comics.

New Characters. I was nervous how Elektra would be handled and whether Punisher would be compelling. Electra took me a couple of episodes to warm up to, because this is a slightly different spin on her than I've seen in the comics, but it was a good spin that worked in this universe and context. I've only read a few Punisher comics and wasn't a big fan of the character, but I'm a big fan of this version of him and would gladly watch a Punisher series if they decide to create one.

Story. The story could not have been better. Even thought there were actually two stories going on, they flowed from one to the other seamlessly. Both grabbed me by the collar and wouldn't let go until the very end. There was so much going on when the final episode began I worried they would rush it, but they didn't. It happened at just the right pace.

Pacing. The pacing was a lot better in this season. It never moved too fast so every scene had maximum drama and impact, and yet it never seemed to drag which is impressive considering it runs for over 12 hours. I watched the first 6 episodes and it felt like maybe an hour or two had passed, not 6.

Same but Different. This season looked and felt like a continuation of the first season. It didn't look like some reinvention had happened in the intervening months. And yet everything was different and new. Nothing was a rehash or a back remake of the first season, something I've never seem before (yes Star Wars, I'm talking about you). It felt like the same world, but a different corner of that world.

Easter Eggs. For a comic book fan like myself, I always appreciate little nods to the comics and other versions of the characters, and this season supplied them in spades from the pulp-styled poster of the gladiator hanging on the wall that looked awfully similar to a Frank Miller/Dave Mazzucelli cover to several nods and direct swipes from Frank Miller's run.


The Red Suit. The red suit still looks stupid. Early in the season Daredevil's suit is damaged by the Punisher, and he is forced to ask the Gladiator to fix it. I was hoping they would use this opportunity to put Matt in the black and red suit from the current comics, but no. Maybe season 3.


This time around I was completely satisfied with everything. I never found myself wishing they had done anything differently.


Overall, I loved this series. It had me hooked from the first minute and didn't let me go until the last. I didn't mean to watch all 13 episodes in one day, but I couldn't help myself. The characters, the story, the acting, the action, the tight plot, and the faithfulness to the comics made this a true classic. The Punisher and Elektra both added to the story and gave up great versions of each character. I highly recommend this series and give it a solid 5 out of 5 remotes.