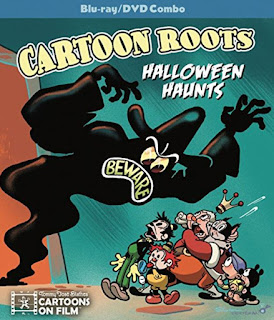 Cartoon Roots: Halloween Haunts is a Blu-Ray/DVD anthology of short films from 1907 to 1948. All feature animation, and many feature live action mixed with animation. They are unrated and appropriate for most ages.


Restoration. Some of these films are 110 years old, so it is really incredible to see them looking this good. Considering the projection technology that existed when these were first created and shown, they may look better than they ever have. I really have to hand it to Tommy Jose Slathés' Cartoons on Film for preserving and presenting these treasures.

Innovation. One of my favorite things about early film is how creative and innovative the early filmmakers were. This was all new with no real precedents, and the animators were a lot of young kids with wild ideas, so they were really free to experiment and fail. I don't think we'll ever see such an era again.

History. Included with this set is a booklet with background information on the shorts that is fascinating and helps put them in perspective.

Three Felix the Cat Cartoons. I love Felix the Cat. His early cartoons are still some of the most original, fun, feisty, and original adventures I've ever seen or read. I think he could be a big hit today if a filmmaker would go back to his roots and make something that daring, bold, and irreverent. And we get THREE cartoons on this set. Granted, one is a mediocre color cartoon that lacked the feistiness of early shorts, but it was still fun.


Mundane Selections. Not every film that has ever been made is a classic and deserves to be viewed or preserved. There are a few examples on this set.

No Real Special Features. This definitely targeted to a small and specific audience. While we love these old films and a beautiful presentation of them, we also love the story behind them. It's a shame there weren't more special features beyond a few newspaper clippings on the DVD and a small booklet with a little background information.


Honestly, this set is everything I could hope for when I first saw it advertised. I've purchased several sets like this in the past and have always been disappointed in them. This one I was truly pleased with. My only minor gripe is a documentary about the films would have been nice. A lot of the work has already been done on the Cartoon Research website.


Cartoon Roots: Halloween Haunts is a true treat. The short films are beautifully restored. Most feature amazing, innovative techniques and original storytelling. And THREE Felix the Cat cartoons! Does it get better than that? I give it 4 out of 5 boxes of popcorn. 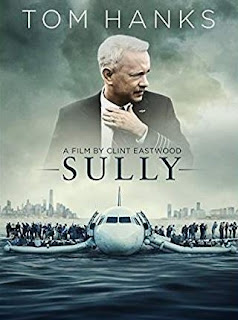 I enjoy movies based on true events, but because it is a true event you know how it will end. This presents a challenge for filmmakers to create suspense, tension, and hold the audience's attention without the audience becoming bored. Sully succeeded marvelously.

Sully is a 2016 drama film based on the true story of a pilot who landed a commercial jet on the Hudson River and all passengers lived. by writing their name in it. It is rated PG-13 for language and is appropriate for teens and older.

Acting. The acting was all really well done. The characters made me feel like I was watching the actual event happen.

Cinematography/Special Effects. The visuals were really strong. It looked like I was actually sitting in New York watching the plane go down or sitting in the plane while it crashed. During the rescue scene, I felt like I was on the plane trying to get out and on the rescue boats heading to the Hudson to save lives.


Story Structure. This movie is not told in a linear fashion but jumps around in time to try and show Sully's mental state and set up a question then show the answer. While I understand why they chose to go with this approach, it didn't add to the film. It actually detracted by breaking up the tension.


I wish the filmmakers had opted for a more linear mode of storytelling. The drama was there. The questions were there and were obvious. The timeline of the story didn't need to be manipulated so much to make the point; the audience is smart enough to figure it out for ourselves. The pilot's concerns and mental state were obvious and clearly portrayed.

Sully was a great film that did an excellent job presenting real events and made the audience feel like it was actually happening and they were part of it. The filmmakers did an excellent job keeping the audience at the edge of their seats with incredible tension making us wonder whether the plane would make it or not even though we already know how it ended. The choice of nonlinear storytelling is the film's main weakness, and while I understand what the filmmakers were trying to achieve, it was unnecessary and didn't add. I give this film a solid 4.5 out of 5 boxes of popcorn.