Book Review - Liquid Rules: The Delightful and Dangerous Substances That Flow Through Our Lives by Mark Miodownik 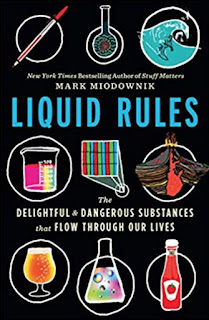 I love well-written science books, which are hard to find. I had read a previous book by this author and enjoyed it, so I decided to try another.

Liquid Rules: The Delightful and Dangerous Substances That Flow Through Our Lives by Mark Miodownik is a nonfiction material science book. It is available as an eBook, Audiobook, and those paper things your grandparents used to read.


Storytelling. The subject of liquids, or any material science, could get pretty dry and pretty academic pretty quickly. The author used a trip in an airplane across the ocean and discussed the different liquids he encountered to form an interesting narrative.

Information. This book has a lot of good information presented in an interesting and easily digestible form.


Sidetrips. The book is pretty short, and yet the author wastes a lot of time on side trips that don't relate to the subject but the author wanted to talk about anyway. I wish he'd used the time to discuss more liquids.

Narration. The narration was good, but not great.


I wish the author would have stuck to the subject matter instead of drifting off onto unrelated topics.


Liquid Rules: The Delightful and Dangerous Substances That Flow Through Our Lives by Mark Miodownik is an interesting look into liquids, their properties, and how humans use them. The author uses the framing device of an airplane trip across the ocean to move from liquid to liquid, which was pretty clever. The author can't help but push his Climate Change biases down the reader's throat even though they have almost nothing to do with the subject of liquids, which was kind of annoying. If you are interested in learning more about liquids in a random order, I recommend this book and give it 4 out of 5 eReaders. 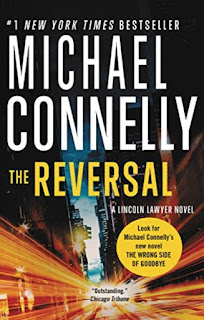 I watched the movie The Lincoln Lawyer and thought it was good but not great, so I had no interest in reading any of the books. I do love the Harry Bosch stories by the same author and accidentally bought one of his Michael Howler books on a sale from Audible. What a great mistake!

The Reversal (A Lincoln Lawyer Novel Book 3) by Michael Connelly is a fiction legal thriller. It is available as an eBook, Audiobook, and those paper things your grandparents used to read.


Story/Mystery. The story begins with an inmate who gets released from prison because the California Supreme Court reversed his conviction due to new DNA evidence. Michael Howler, a defense attorney, is convinced to be the independent prosecutor for the DA and has to cross to the other side. The story is intense from the beginning with each new reveal only pulling the reader further and further in. While there aren't any big twists or shocking reveals, each step is completely engaging and absorbing.

Characters. The author does a really good job exploring the personal lives of many of the main characters and advancing the story of Harry Bosch and Michael Howler growing a little closer after finding out they are half brothers and their daughters are cousins.


Narration. The narration was good, but not great. It was the only weak part of the whole experience.


I would like to have seen what Harry Bosch does after the end of the book.


The Reversal (A Lincoln Lawyer Novel Book 3) by Michael Connelly is one of the best fiction books I've read in a long time. The story is intense from the beginning with each new reveal only pulling the reader further and further in. While there aren't any big twists or shocking reveals, each step is completely engaging and absorbing. Even when events or twists turn out like you guess, you're still interested because they are handled so well. I highly recommend this book and give it 5 out of 5 eReaders. 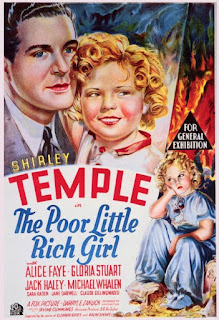 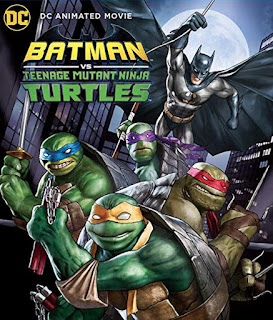 I'm a huge Teenage Mutant Ninja Turtle fan, but the idea of them crossing over with DC or Marvel characters never seemed like a good idea. The first comic book mini-series this film is based on was pretty disappointing. But Amazon had the rental on sale, so I thought, "What the hay?"


Story and Pacing. This movie had a solid story that made sense, wasn't contrived, and moved logically from one scene to the next. The pacing was deliberate and slow enough to develop the story but fast enough to never become boring.

Animation and Art Direction. While this wasn't my favorite look for the characters, it worked really well for the story and the movie.

Action. The fights were so fun and so well done showcasing so many characters and most of their abilities and unique traits. It was fun to see Batman and Shredder so evenly matched and such a long struggle to fight each other without a quick resolution.

Titles. The titles were gorgeous with black and white cityscapes and colored characters in front. The end credits with famous comic book covers recreated with Batman and the Turtles were also very clever.

Fan Nods. There were a lot of easter eggs and nods to the fans as well as references to previous incarnations both in film and print of the characters that really made the world rich.

Voice Acting. All the voice casting choices were new, but they felt classic.


Violence and Swearing. I get this movie is meant to appeal to an older audience, but the action and sophistication of the story would have done that. The extreme violence and cussing actually detracted from the film.

Science of Ooze/Mutagen. The fact that the ooze works instantaneously and can only be cured within a short window makes absolutely no sense. Everything else was well thought out and well considered. The major McGuffin of the story not being well considered was kind of strange.


I wish the Batmobile had been a cooler design.


Batman vs. Teenage Mutant Ninja Turtles is one of the best animated films I've ever scene. The story is solid and well considered, the action is fast and fierce and showcases each character's unique abilities, the voice casting sounded classic, and the titles were gorgeous. Even though this film was targeted to an older audience, the amount of violence and harsh language detracted feeling contrived and forced. I give this film 4.5 out of 5 Boxes of Popcorn.