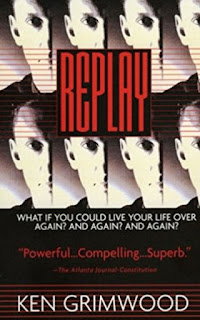 I'm a big fan of time travel stories, but find myself disappointed that every story has been done at least four dozen times and there are no new twists or takes on the genre. Then I read Replay.

Replay is a character-driven romantic drama written by Ken Grimwood. It's available as an audiobook and those paper things your grandparents used to read.


Jeff dies of a heart attack. Then he wakes up in his younger self decades in the past with the chance to live his life again with all of his previous knowledge. And he takes full advantage of it and even finds out he isn't the only one.


A New Take on Time Travel. I was really surprised to find a new take on time travel. While it isn't radically different or original, it's different enough that it felt fresh and new and I didn't know exactly what was going to happen.

Characters. The characters felt very real and developed. I felt like I was reading about actual people going thru actual experiences in a biography. It's rare an author can write characters that aren't obvious versions of himself.

Ending. The ending wasn't a huge shock or twist, but it wasn't what I was expecting. And it added a really nice close to the story.


Melancholy. The only minor quibble I have with this story is at times is got a little too melancholy with the characters spending too much time moping.


I wish the author had revealed how the characters were able to relive their lives. It wasn't necessary to the story, but inquiring minds want to know.


Replay by Ken Grimwood is a really intriguing character-driven romance that takes a fresh approach to the time travel genre. The characters are so real it feels like reading a biography at times. I give it a solid 4.5 out of 5 eReaders.