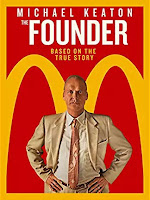 I tend to enjoy a lot of independent films and biographies. I also think Michael Keaton is a great actor. So this movie seemed like one I would like.

The Founder is a 2017 drama based on the story of how McDonalds came to be. It is rated PG-13 for language and is appropriate for teens and up.


Acting. Michael Keaton is a great actor, and he pulled off this role marvelously. I never once felt like I was looking at or watching Michael Keaton. He really sold the character.

Storytelling. The story of the McDonalds brothers, Ray Kroc, and the rise of the greatest fast food chain in history is an intriguing story, and this movie did and excellent job bringing it to like and making you feel what each player felt and understand what each player's motivation was.
Visuals. The way this movie was shot from the camera angles to the colors to pacing felt very much like a 1950s or 1970s movie, which is appropriate considering the time period this takes place. I really felt like I was watching a window to the past.


Pacing.  This movie did drag towards the beginning and from time to time. It spent too long on boring actions and ugly scenery. I get what the filmmakers were going for, but it didn't add.


I appreciate how focused the film was on Ray Kroc and his story, but other characters had a lot to do with his story and they were little more than set pieces in this movie. I wish their contributions and stories had gotten a little more screen time.


The Founder is well-crafted movie that does an excellent job of telling the fascinating story behind the founding of McDonalds. The acting and filming are so well done that it feels like a window into the past. I give it a solid 4.5 out of 5 boxes of popcorn.