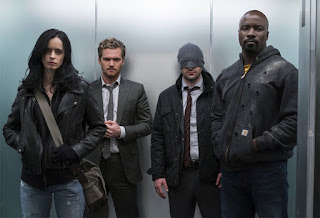 When I heard about the Marvel's Defenders TV series from Marvel, I couldn't wait for it to arrive. After watching the masterpiece that is Marvel's DareDevil, I became even more excited. So how did the reality match up to my ridiculously lofty expectations? Fortunately, the other Marvel series were pretty disappointing and tempered my excitement.

Marvel's Defenders is an 8-episode 2017 Netflix Original Mini-series based on the Marvel Comics superhero characters of Daredevil, Jessica Jones, Iron Fist, and Power Man. It is rated TV-MA for language, violence, and gore and is appropriate for older teens and up.


Characters. The best part of this mini-series was the characters. While Daredevil was the only character strong enough to carry his own show, as a team all the characters work well and are likable. I also appreciated how all the major characters from the previous mini-series were included in this, several having fairly large roles.
Lack of CGI, Wirework, Green Screen, and other Special FX. I love how down to earth and real this show looks. There are no cgi Hulks or green screen battle scenes or wirework flying or other special effects one sees in almost every superhero adaption that look mediocre now and will look terrible in ten years. This all looks very real, and will hold up for years to come while other superhero adaptions will just get sillier and sillier as time moves on.

Tying up Previous Threads. I was concerned about how the producers would be able to stuff all four characters and their stories from five 13-episode series into one 8-episode mini-series, but they did it. All of the storylines and conflicts from the previous Netflix Original Series were tied up nicely with the characters set up to start new stories. And it was all done very satisfactorily with nothing feeling rushed or short changed.

Colors.  The first two episodes make use of each character's unique color (Daredevil - red, Jessica Jones - blue, Iron Fist - green, Luke Cage - yellow) in the background to signal who was being featured at the moment. It was subtle, but a nice touch.


Pacing.  The first two episodes moved very slowly and dragged. Too little happened both plot wise and emotionally. The story didn't really pick up and get going until halfway thru the third episode.

Fragmented Story Telling.  The producers made a very deliberate effort to give each character equal screen time and not wait too long to show the next character. This caused the first few episodes to feel like brief vignettes that felt very disjointed and unconnected.

Scope / Gravitas.  Other than the earthquake early in the series, the stakes never felt very high nor the danger very real. Almost all the peril came from characters saying this was series, but the audience never saw it on screen and so never really felt like the stakes were very high or New York was in that much danger.


I wish the story had been stronger by focusing on one or two main arcs instead of fracturing the plot so everyone had equal screen time and things to do. I also wish the show had looked as nice as the previous mini-series with better sets and other visuals.


Marvel's Defenders does an excellent job of bringing these four very separate heroes and their stories together and tying up all the threads and storylines that have been playing out during the previous five series. While it begins a little slow and fractured, by the third episode, the story kicks into high gear and holds your attention. I'm excited for Phase Two. I give this show 4 out of 5 remotes.