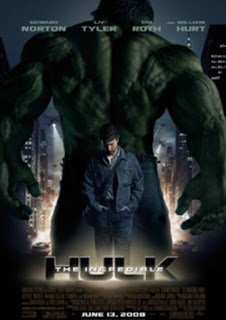 I've been an Incredible Hulk fan for as long as I can remember. I've enjoyed most of his incarnations from comic book to cartoon to film. There were a few misfires such as that Ang Lee disaster. Fortunately, Marvel decided to redo the film, and do it right.

The Incredible Hulk is a 2008 action drama horror superhero film based on characters appearing in Marvel Comics. It is rated PG-13 for language and violence and is appropriate for tweens and up.


Acting. This movie was so well cast and so well acted. Everyone gave such a believable and emotional performance.

Silent Film aspects. Unlike most Marvel movies which are constant dialogue, jokes, and confessions, this movie relies heavily on visuals. It feels like a quarter of this movie is a silent film where nothing is said, and yet the audience knows exactly what is happening and what the characters are feeling. It was masterfully shot.

Story. The story was solid and naturally progressed from one scene to the next never feeling forced or contrived or too convenient.

Nods to Classic TV Show. The film contained a lot of nods to the original Bill Bixby/Lou Ferrigno tv show from the music to the opening scene to the first transformation of the hulk, to the post transformation scene.

Visuals. The film is beautifully shot. Each frame looks like a painting. The big shots feel so big, and the smaller shots feel so intimate. The fight sequences are so clear and well choreographed, not claustrophobic confusing shaking like so many current films.

Horror Vibe. This film had a very distinct classic horror vibe like the Alan Moore run on Swamp Thing. It's not a horror movie per se, but so many troupes and techniques from classic horror were used to create suspense and a real sense of urgency and struggle.


CGI. I'm not sure why Hollywood is afraid to cast an actual human and paint him green to play the Hulk. Lou Ferrigno's performance in the TV series still holds up solidly and is the best live action portrayal of the character ever. When it came out the cgi looked like a bad video game, and has only gotten worse with time.


I wish they had used a real person for Hulk. Otherwise the movie was pure perfection.


The Incredible Hulk (2008 Film) may well be the best Marvel film to date. It has a solid story, great casting and acting, beautiful visuals, makes incredible use of visuals where the audience knows exactly what is going on and what the characters are feeling without the crutch of constant dialogue every other Marvel film relies on, and incorporates the best elements of the classic TV show. The only weakness with the cgi which looked like a video game (like almost all cgi does in film). This film is a classic and perfect example of how to adapt a comic book for the silver screen. I give this film 5 out of 5 boxes of popcorn.