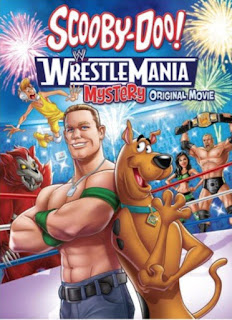 I've been a Scooby-Doo fan for as long as I can remember. I haven't been a fan of all his incarnations, but they have been fun to see different ways he and his gang can be reinterpreted.

Scooby-Doo! Wrestlemania Mystery is a 2014 direct-to-video action comedy film featuring Scooby-Doo and the gang. If it were rated, it would be rated G and is appropriate for all ages.


Visuals. This movie has really nice character designs and background designs. It has the right balance of cartoony and realism to make the WWE wrestlers look like real people but still like they fit in Scooby-Doo's world.

Story. The story is one of the strongest for a Scooby-Doo tale with some real thought to motivation and twists. It's still not going to win any awards.

Action/Animation. The animation is really well done with the wrestling looking smooth.


Opening Titles. The song wasn't great and there was no logic or reason to show the villains from the first season. They don't make an appearance here. It looked more like an anniversary title sequence than WWE.


Scooby-Doo! Wrestlemania Mystery is a fun direct-to-video movie appropriate for all ages--safe for the youngsters and entertaining for the older crowd. The animation is very smooth and fluid, the character designs are both cartoony enough to be Scooby-Doo and realistic enough to make the WWE wrestlers look like actual people, and the story is much stronger than most direct-to-video cartoons with actual thought put into motivation and twists. While nothing groundbreaking, it is a lot of fun with the usual troupes one expects from this kind of movie. I give this film 4 out of 5 Boxes of Popcorn.