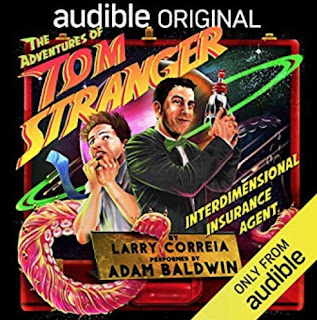 I'm not the biggest fan of political satire or comedic social commentary, because it tends to be really obvious and negative. It's rare to find something clever and not mean spirited. But every once in a while...

The Adventures of Tom Stranger, Interdimensional Insurance Agent by Larry Correia is an Audible Original scifi comedy. It is available only as an Audiobook.


Comedy. This book is very funny using insurance to make a lot of really funny jabs at the bizarre things going on in the world and with the government. And it leans slightly conservative which is really refreshing.

Story. The story is pretty simple and straightforward, but takes a unique approach and does a good job exploring several different angles of that approach.

Characters. Most of the characters are very likable being slight variations on classic troupes.


Villain. The main villain was a little too "classic black moustache" and could have used a little more originality.


The Adventures of Tom Stranger, Interdimensional Insurance Agent by Larry Correia is a fun, clever comedy that uses insurance as the vehicle to make a lot of really funny comments on society and the strange things the government has done recently. The characters are variations on classic troupes but are still enjoyable. It's a short story that covers a lot of ground in under three hours. I recommend this book and give it 4 out of 5 eReaders.