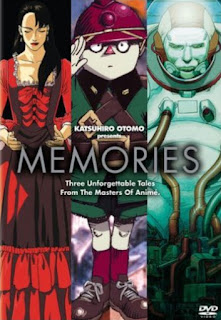 I love animation that tries something new, and I love animated shorts. I also love anime from the 80s and 90s, so Memories seems like something I should love, right?

Memories is a 1995 anthology of three anime films based on short stories by Katsuhiro Otomo. It is rated PG-13 for language and adult themes and is appropriate for teens and up.


A salvage team in space receives and SOS and investigates and finds a satellite where a famous opera singer once lived and now appears to be haunted.

Story 3.5/5. The story is interesting but so vague it's hard to follow. Katsuhiro Otomo in an interview indicated this was what he meant to do, so it isn't a matter of the viewer just not getting it.

Animation 5/5. The visuals could not be more breathtaking. The movement couldn't have been better done. From an artistic standpoint, this is a masterpiece.


A man working at a research institute has a cold and accidentally takes an experimental drug that has disastrous effects. This is a dark comedy.

Story 4.5/5. The story is very straightforward, moves as a great pace, and has a twist ending (that you see coming from a mile).

A silent short about the day in the life of a village in the middle of a war that's been going on so long it's just become part of daily life.

Story 3/5. The story is supposed to be an anti-war film, but I doubt you would get that from watching it. Again, it's just a day-in-the-life-of story that is so vague you could attach numerous meanings to it.

Animation 4/5. The visuals are interesting in an experimental way, but nothing anyone would want to copy.


Memories is a 1995 anthology of three anime films based on short stories by Katsuhiro Otomo. There is no overall theme or other connection between the three. The animation is amazing in all three, especially the first two. The stories are another matter. Katsuhiro Otomo in an interview indicated he meant the stories to be vague, and they are. The second story is very linear and strong, but the twist ending is pretty predictable. I give this anthology 4 out of 5 Boxes of Popcorn. 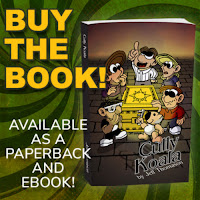