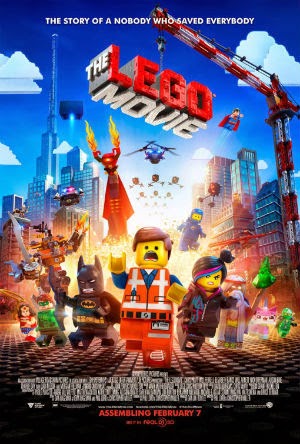 I grew up with Legos and have always loved them. They were fun to build with, but I also loved the story that went with them. When I was young, Legos were marketed under the Legoland name with three worlds: Space, Town, and Castle. Space were always my favorite (especially the Fururon and Blacktron sublines), but I did have a lot of Castle Legos too (the Forestmen were my favorites). Later they added Pirates, Boats, and later licensed properties. While playing with them, I always imaged an animated TV series, comic book, or a movie about Legos and wondered why no one ever made one. Apparently I wasn't the only one who thought that.

The Lego Movie is a 2014 computer generated action adventure comedy film shown in both 2D and 3D. It features many big name stars doing the voices of the characters, and features many big name characters from other universes such as Superman, Batman, Wonder Woman, Green Lantern, Michelangelo of the Teenage Mutant Ninja Turtles, and others. It is rated PG and is appropriate for all ages.

The story was very strong, with a good solid plot. There weren't really any big twists, but the end where they acknowledged Legos were toys was a nice touch and added to the overall theme, story, and plot.

The characters were very likable from the unknown main characters to the guest starts like Batman who wasn't your traditional caped crusader but enjoyable nonetheless.

The tone of the movie was fun, adventurous, and hilarious that stayed true to the spirit of Legos.

The jokes were plentiful and funny with a variety that will appeal to different age groups. The pop culture references many but were done in such a way that you could still enjoy the movie even if you didn't get them

What's nice about The Lego Movie is it isn't a kids movie or a family movie; it is a truly all ages movie, which means children and adults with both really enjoy it. The language, action, and jokes are not too offensive for children, but the story, jokes, and adventures wasn't watered down or dumbed down so adults will enjoy seeing it to. This is a rare--and welcomed--find.

With all the hype, positive reviews, and great trailers, I was expecting to be blown away by the film's brilliance. I wasn't. I really enjoyed the movie and felt it was an excellent film, but it didn't quite live up to all the hype. It could have been funnier with a little more wit in the writing.

What I Would Liked to Have Seen


Being a fan of Legoland, I would have liked to have seen them visit the space worlds (especially Furureon) and castle worlds (especially the Forestmen). Instead they opted for a big city, the Old West, and licensed properties. I'm sure the licensed properties brought in a lot more fans, so I don't fault them for that. And this may open the door for more shows that do explore the classic Legoland worlds.

Overall I felt this was an excellent movie that has a lot for moviegoers of all ages to enjoy. It was completely appropriate for young children while being smart, clever, and exciting enough for older viewers. This movie is well worth your time, and I highly recommend it for all audiences. I give it 4.5 out of 5 bags of popcorn.