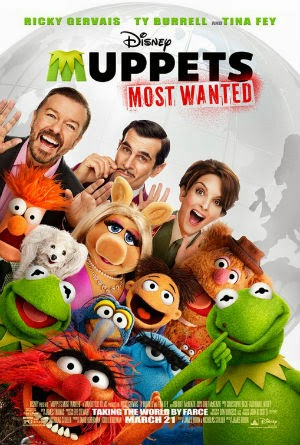 I've loved the Muppets for as long as I can remember. Saturday afternoons were often spent watching reruns of The Muppet Show. And while I was too young to recognize almost all of the guest stars, I was still enchanted and entranced by the whole experience. The show was made for adults, but it was quickly embraced and beloved by children as well.

Muppets Most Wanted is a 2014 live-action comedy adventure rated PG and is appropriate for all ages. It is the second in the relaunch of the franchise, although as one of the characters noted in the movie, this is actually the seventh sequel to the original film.


The Story and Plot. The movie was clever and very true to the spirit of past Muppet movies. It had a good solid story that moved at a good pace and never left me bored or looking at my watch.

The Jokes. The jokes were your typical puns, gags, and physical comedy one comes to expect from the Muppets, and yet they're still as funny today as they were in the 70s when Muppets first debuted. They've kept the tone of the humor the same, but the jokes definitely referenced the current world. And while I saw the Usher joke coming, I was still rolling on the ground laughing when it came.

The Casting. Guest stars are a staple of any Muppets production, and this one did not disappoint. It was filled with current stars and celebrities from music, movies, and more. The main characters were funny and played everything just right with the proper mix of silly and serious.

As I stated before, The Muppet Show was meant for adults, but it had so much charm that all ages fell in love with it. This movie is no different. There is plenty to entertain small children, teenagers, and adults alike. This is truly an all-ages film, which is a rarity in today's world.


The only complaint I have is there was nothing really surprising or unique about this movie. It felt just like past Muppet movies; it brought nothing new to the table. It makes one wonder why this movie was made and would it really be worth ones time to see the next one if it's going to be more of the same. While I'm glad they didn't mess with the formula and ruin the franchise, that doesn't mean you can't expand on the magic.

And Tina Fay's accent was way too fake and kind of distracting.


I remember being quite awed by the special effects in Muppet's Christmas Carol. That movie was very true to everything we've come to love about Muppets, but it introduced new elements that were very appropriate and fitting and added to the story instead of being just a gimmick. I was hoping to have a similar experience with this movie. I'm not saying they needed to have ultra modern special effects, but it would have been nice to bring something new to the table that expanded on the magic whether it was with the writing, the humor, the guest stars, or some completely new element.


Overall this was a very funny movie with jokes, gags, and enough action and excitement to keep me entertained from start to finish. It felt like the classic movies Jim Henson himself made, which after disasters like Muppets in Space or that strange Christmas special I never thought I'd see again. I give it 4.5 out of 5 boxes of popcorn.