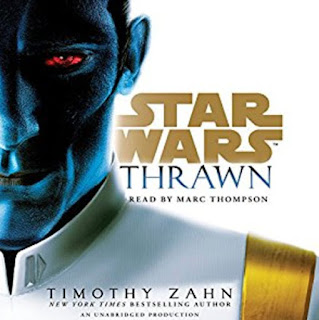 I love Star Wars and when I was younger I hoped for the longest time they'd make more. When I was in high school I saw a friend reading Heir to the Empire by Timothy Zahn and got really excited about more Star Wars adventures. I eventually read the trilogy and loved it. Then he followed it up with a duology that wasn't as good. So I wasn't sure what to expect from his latest outing.

Thrawn is a science fiction space opera set in the Star Wars Universe by Timothy Zahn. It's available in all formats: eBooks, Audiobooks, and those paper things your grandparents used to read.


Writing. The writing is very crisp and clear. The author cares primarily about telling a story and never lets the words get in the way. Unlike some, he doesn't feel the need to impress the reader with his extensive vocabulary or eloquent locution.

Characters. The characters are all very interesting and fleshed out enough that the reader has pretty strong feelings about all of them.

Strategy. The majority of this story consists of incidents and how Thrawn uses strategy to deal with them. It very fun to read and fascinating to watch.

Movement Thru Time. This book covers several years and does a really good job jumping from one incident to another several months or several years later so the reader never feels bogged down by unnecessary explanation or exposition.


Too Short of Time Span. This story covers the period of time when Thrawn meets the Empire to when he becomes a Grand Admiral. I was expecting to find out more about the character. I suppose that means there will have to be a sequel.

Change in Character. The Thrawn presented in this novel feels like a different character from the Thrawn in Heir to the Empire and its sequels.


I wish we had seem more of Thrawn's early life to better know him as a character.


Thrawn is a great book that held my attention from page one. It feels like the Star Wars Universe and faithfully adds to the mythology. I give it a solid 4.5 out of 5 eReaders.