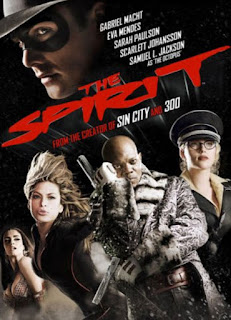 I'm a huge Frank Miller fan and have been since Sin City: Hell & Back, 300, and the Dark Knight Strikes Again! I also enjoy classic comics from the early 20th Century, so combining the two should create a masterpiece, right? Right?

The Spirit is a 2008 action comic strip noir film from comics legend Frank Miller based on The Spirit comic strip which appeared in newspapers throughout the late 30s and 40s created, written, and drawn by Will Eisner. It's rated PG-13 for language, violence, and nudity, and is appropriate for teens and up.


The Spirit is a cop who everyone but the police chief thinks is dead. He battles a wild villain, The Octopus, and a former lover.


Style & Visuals. This film is absolutely beautiful to behold. It looks like nothing else you have ever seen with an amazing mix of Frank Miller's chiaroscuro artwork and classic Hollywood film noir. The style alone makes this movie worth watching.

Actors. This film features a lot of really great actors from Gabriel Macht to the father from Wonder Years to Beckett from Castle. Their acting is really good, but is marred by bad dialogue.

San Serif Story. Half this film features a story taken from the comic strip about The Spirit's first love, and it is a really good story. Unfortunately, it isn't the only story.

Credits. The credits are Frank Miller's storyboards which are works of art and make a really unique and fun credit sequence that I've watched several times.


The Octopus. Samuel Jackson plays the Octopus, but instead of following the comic strip version, which was pretty cool, he was written and directed to portray the character as a live action Wile E. Coyote from Looney Tunes, which did not work at all. Ridiculous and unwatchable doesn't even begin to describe this character. In fact, I usually just cue past all of his scenes, and it makes for a pretty good movie.

Dialogue. The dialogue is awful. It is stiff and feels like an amateurish attempt to capture classic Hollywood detective movies. The narration is pretty good, but everything else is terrible.

Pacing. This movie is very slowly and unevenly paced.


I wish the Octopus had been portrayed more like he is in the comics, as a mysterious hand controlling crime in the city with a big reveal at the end. I wish the movie had better dialogue and was edited more tightly with more exciting music. There are a lot of great elements and great story that just aren't presented well, but could be.


The Spirit is a beautiful film with more style and gorgeous visuals that almost any other, a great story, and great actors. Unfortunately, it is mired by a lousy second story, an overly cartoony villain, and dialogue that will make your ears hurt. I give it 3.5 out of 5 boxes of popcorn.