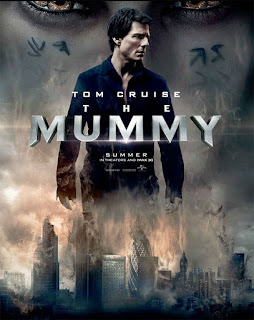 I enjoyed the classic Universal monster movies, and I really enjoyed the Brendan Fraser remake of The Mummy (at least the first two), so I was curious to see what Tom Cruise would do with the franchise.

The Mummy is a 2017 action, urban fantasy, thriller, remake of the 1932 classic starring Boris Karloff and is the first in Universal's new Dark Universe series. It's rated PG-13 for language, violence, and brief nudity, and is appropriate for teens and up.


Visuals. This film looks really good. All the costumes and sets are well done. The stunt work and cgi is solid.

Story. This film has a really good story. Unfortunately it wasn't told as well as it could have been.

Action. Like all Tom Cruise movies, the action and stunts are second to none.

Dark Universe Set-up. I'm actually really excited for the Dark Universe. This movie hinted at a lot of cool stuff to come.


Not Scary. This movie was trying to be a classic horror film filled with suspense, and there were definitely scenes filmed to be suspenseful. Unfortunately, they were mediocre copies of scary scenes in other movies, and none of them made me jump out of my seat.

Storytelling. The storytelling was at a Hallmark movie of the week level, not summer blockbuster level, so it was good but not as good as movie goers were expecting.

Predictable. Nothing in this movie surprised me, none of the reveals or twists, which in a suspense/terror movie isn't a good thing.

The Mummy. Having a female mummy was a clever idea. I just wish they had cast some other actress and written her a better role, because she wasn't scary, she wasn't beautiful, she wasn't dangerous, she wasn't intriguing in any way like a good villainess should be.


I wish the movie had been scary (they were going for terror but never made me jump out of my seat) and that the storytelling had been stronger (a lot of which could be fixed with some clever editing).


The Mummy is an entertaining flick with great action and great visuals and is a nice introduction to the Dark Universe. While it's a good movie, it's not a great movie which is what everyone was probably expecting and why people are hating on it so badly. I give it 4 out of 5 boxes of popcorn.