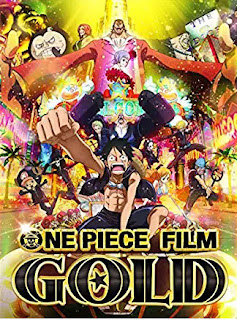 I've heard of One Piece, but I've never read the manga or watched the anime, and I've never really wanted to. But then I saw a trailer for the film, and I couldn't rent it fast enough. But would the film live up to the trailer?

One Piece Film: Gold is a 2016 action fantasy anime film from Toei Animation based on the manga of the same name by Eiichiro Oda. It's unrated, but is appropriate for tweens and up due to some mild language and fantasy violence.


The Straw Hat Pirates visit a floating casino run by a man who has the power to control gold and engage in a battle of who can cheat whom better.


Opening Sequence. The opening sequence is brilliant! It's basically a large music production mixed with a giant action sequence that manages to introduce the main characters, motivations, and what to expect from the story in just a few minutes. I watched it multiple times.

Villains. The villains were so fun from their designs to their unique quirks to their personalities. They were, without doubt, the stars of the show.

Visuals. This film was a visual feast from the colors to the sets to the costumes to the special effects. Even if the story had been dreadful, this would be worth watching for the visuals alone.

Animation. This film was very well animated with beautiful fighting scenes to great facial emotions. The long, lanky design of the characters was used to the maximum with the frantic movements that both communicated emotion and looked cool in fight scenes.

Nonwestern Style of Storytelling. This movie was very watchable to a Western audience, but it wasn't paced or plotted like a typical American film. There were a couple of times I thought we had hit the climax and it would end soon, but it kept going, developing everything fully where an American film would cut it short to fit a certain pattern and pacing. It was nice and refreshing.


Straw Hat Pirates. The Straw Hat Pirates are the main characters of the series and movie, and they are probably beloved in the manga and anime series. But in this movie they were the weakest part. They were never properly introduced, so I didn't really know who they were or what they could do until I looked it up afterwards. For fans of the series, this wouldn't be a problem, but it wouldn't have hurt the film to introduce the characters and flesh them out even briefly. The title sequence wasn't enough. They also aren't the main characters of the movie, the King of the casino and his co-patriots are, and they are much more interesting and much more fleshed out.


I wish the main characters, The Straw Hat Pirates, had been more interesting.


One Piece Film: Gold is a great movie with beautiful visuals, interesting villains, great storytelling, tons of plot twists, and amazing animation and action. I give it a solid 4.5 out of 5 boxes of popcorn.