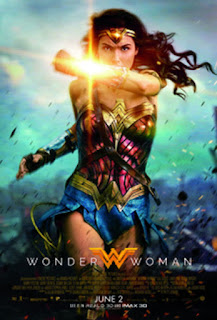 I have loved the character Wonder Woman for as long as I can remember. I loved the Lynda Carter 1970s television version, and I loved the 1980s SuperFriends version. I loved the original comics by William Moulton Marston and H. G. Peter, and I loved the George Perez and John Byrne reinventions. I even liked the New 52 version. But she is such a hard character to get right. Too many people either make her too silly and girly (like most of her comic appearances from the mid-40s to the 80s) or too witchy (like Bruce Timm's Justice League, Justice League Unlimited, and the DC Original Animated Feature). But when she is done right, no one can compare.

Wonder Woman is a 2017 live action superhero action film based on DC Comics characters. It's rated PG-13 due to violence and a few sexual innuendos, but is appropriate for most ages.


Diana grows up on Paradise Island not knowing her true destiny until an American officer, Steve Trevor, accidentally crash lands on her island causing her to leave her home and travel to man's world to end World War I.


Gal Gadot. Gal Gadot was definitely the best part of Batman vs. Superman: Dawn of Justice. After such a strong introduction, I was pretty sure this movie would be good. Her portrayal of Diane is spot on. She's sweet, kind, loving, compassionate, strong, and just. She never becomes witchy or disrespectful. Her strength isn't just physical but stems from her character.

Chris Pine. Chris Pine is great in everything he does. He's strong and powerful in this movie but also loyal and kind. His character isn't some Lois Lane weakling that needs saving and does quite a bit of saving on his own.

Story. The story is solid, interesting, and well told with nothing that would make you roll your eyes.

Pacing. The movie is long and doesn't rush anything, but it never drags

Action. The action is amazing! Even as spoiled as I've become watching so many Marvel movies, I was still blown away.

Humor. There isn't a lot of humor in this movie, but what little there is is incredibly funny, some of the funniest dialogue I've heard in a motion picture in quite some time. And it's spaced throughout the movie to provide relief from such heavy themes and settings.

Respect. This movie respects the characters. They all have an important roll to play and are treated like people and not plot devices (except for a couple of villains as you'll read about below).

Message. The movie has a very clear message that is relevant and important today about war, conflict, and human nature. While it is very clear and well developed, you never feel like you're being beat over the head with it.

True to the Comics. The filmmakers did a brilliant job incorporating so many elements from the comics (even the New 52) without any of them feeling forced.


Villains. The General and Dr. Poison are played a little too cartoony and silly in places. The point of the movie is Wonder Woman and her discovery, so the filmmakers were wise not to spend too much time on developing the villains, but they could have made them more interesting.

Jumping and Strength Special Effects. Wonder Woman is shown several times jumping inhuman distances and lifting objects only Superman could lift. Unfortunately, these weren't done well. They look very fake and video gamey, and not in a good way. I wish the filmmakers had spent a little more time staging them so they felt more believable.


I wish the special effects had been a little more carefully rendered and the villains weren't so cartoony. Otherwise it was everything I could hope for.


Wonder Woman is everything you could hope for in a superhero movie. It had a strong story, amazing action, beautiful visuals, and most importantly they got the character right. I give it a solid 4.5 out of 5 boxes of popcorn.