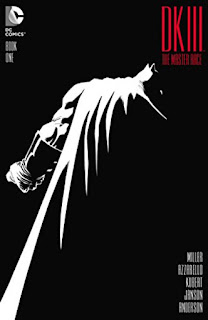 I know this will sound strange, but I was not a fan of Frank Miller's Dark Knight Returns but loved Dark Knight Strikes Again! Now, before you start casting stones, let me explain.

Dark Knight III: The Master Race is a dystopian future, superhero comic book mini-series and a sequel to The Dark Knight Returns and Dark Knight Strikes Again! It's available in print and digitally and will soon be collected.


Artwork. Andy Kubert is the penciler on this series, and his work has never looked so good. He perfectly captures the Frank Miller vibe from the original mini-series, but infuses his own style and current artistic sensibilities into it to create a modern-looking homage with the fun and flavor of the original but none of the dated look. The inking and coloring are good, but not stellar.

Story. The story is really, really good. It's one I've never read before, which is surprising because now it seems so obvious and such an essential part of the mythos. It involves many characters from Dark Knight Strikes Again! and basically continues that story with a few nods to the original. Unfortunately, the story isn't well told. The idea is great; the execution not so much.

Mini-comics The mini-comics are the best part. The first three have varying artists, but by issue 4 Frank Miller takes over the artistic and storytelling chores, and each is a little masterpiece. They are bold. They are exciting. They fill in gaps of the main story further exploring the individual characters in this universe. Each one is very short, and yet tells so much story, much like the classic Will Eisner The Spirit comic strips in newspapers of the 50s. These are the reasons I rushed out to buy each issue the second it was on sale.


Pacing. The story is very unevenly told with some scenes being cut short and not fully explored and developed and others being drug out too long just to fill a certain page count.

Filler Pages. The last half dozen pages or so of each issue are basically uncolored artwork from the issue. While it was nice to look out, the pages could have been much better utilized to tell more story instead of cutting so many scenes short.


I wish this comic had followed the pattern of the first two mini-series and had only three or four issues that contained two to four issues worth of story. That would have fixed the pacing issues, although I'm not sure how the mini-comics would have worked.


Dark Knight III: The Master Race tells a really interesting story that's never been told in DC lore with incredible art but not-so-great pacing rushing certain scenes while stretching others out way too long. The mini-comics were the real jewels of the mini-series and the reason I rushed to read each issue. I give it a solid 4 out of 5 eReaders.