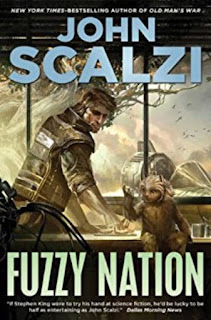 I'm a big fan of classic science fiction from the mid-1900s and John Scalzi, so I was curious to see the combination of the two even if the subject matter wasn't the most interesting.

Fuzzy Nation is John Scalzi's retelling of an earlier science fiction story by H. Beam Piper. It's available in all formats: eBooks, Audiobooks, and those paper things your grandparents used to read.

A prospector working for a large corporation discovers both a large mineral deposit and a sentient species on a remote planet. The discovers cause major legal woes for all.


Writing. John Scalzi is a master of words. The words don't interfere with the story, which I always appreciate. The story moves at a good pace and is always interesting.

Characters. The characters were all very likeable and sufficiently developed for this story. They were all memorable enough that I cared what happened to them.

Narration. Wil Wheaton does his usual great job with this story. His voice and approach really fit the types of stories John Scalzi writes.


Melodramatic, "They Lived Happily Ever After" Ending. The story was pretty good up until the very ending when suddenly the little guy who keeps losing throughout the story suddenly completely and utterly defeats the giant, all powerful corporation through a short preliminary hearing with a few Perry Mason-style legal maneuvers. It was just too much. The character, while a lawyer, was never shown to be at Perry Mason's level, and his arguments in the book would never fly in a real court of law.

Soft Science and Pedestrian Legal Battle. John Scalzi is a jack-of-all-trades, but a master of none, as this book shows.

While I appreciate how varied and genre-crossing his stories are (one of the reasons I read them), it's clear his understanding of most topics doesn't extend beyond what he's read or watched on TV. This book is mostly an environmental sob story, but becomes a legal thriller at the end. The environmental story is the same standard propaganda one sees on popular TV shows with little read science or thinking behind it. The legal battle at the end has about the same level of credibility.


I wish John Scalzi would spend more time preparing to write the stories by obtaining the necessary technical knowledge in the subjects he chooses to write about instead of using a pedestrian level of knowledge on gains from reading and watching fiction and mainstream media coverage. His writing is really good, his ideas and take on subjects are always interesting and fun, but the stories always suffer from a lack of real expertise that would turn enjoyable stories into masterpieces.


Fuzzy Nation is an enjoyable read with interesting characters, but nothing I haven't read before. The science is fairly pedestrian and the legal battle at the end little more than a back Perry Mason parody. I give it 3.5 out of 5 eReaders.