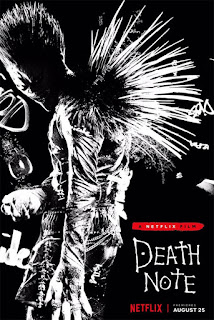 I enjoy reading manga and watching anime, and I get excited for every film adaption that comes along, even though I usually end up disappointed. But let's face it--they only works that would work as a direct adaption are Astro Boy and Akira. Everything else would require a lot of adapting, and die hard fans tend to get mad at such meddling. And most of the time the adapting isn't a great film on its own nor contains enough of the original to make the fans happy. Death Note is an exception. I've never seen the anime or read the manga, so I had no preconceived ideas and can judge the film on its own merits.

Death Note is a 2017 Netflix Original horror film based on the manga and anime of the same name. It tells the story of a boy who is given a journal with which he can kill anyone by writing their name in it. It is rated TV-MA for language, violence, and gore and is appropriate for adults.


Adaption. I'm really impressed at what an amazing job the filmmakers did to adapt this story. They took the basic elements, ideas, and themes from the manga and created a wholly American production. Watching it, you'd never know this was based on a Japanese property. It had a solid story, a cohesive plot, and developed the themes well. I can understand superfans of the original being upset at all the changes (I myself do the same with properties I love), but they were necessary to make a good film. A direct adaption wouldn't have attracted an American audience.

Pacing. Even though this is based on a Japanese comic and show, it's been completely translated into an American film and so it moves very quickly and never drags. Those who are used to the extreme decompression of anime (it takes four times as long to tell the same story) have complained that it moves too quickly, but an American audience will appreciate the pacing.

Actors. I really like the actors cast as Light, his girlfriend, his father, and the rest (with one exception). They all fit the roles well. I think the reason there has been so much backlash against them online is because of how anti-white certain parts of society are becoming--this prejudice and bias blind them to what's really going on in front of their eyes.

Ryuk. The death god could have gone really badly, but the filmmakers played it smart by hiring a great actor to voice the character and they showed him in the shadows so the cgi wasn't so distracting. He was great every time he appeared on screen, but he wasn't overused so each appearance had maximum impact.

Music.  During two dramatic moments at the end the filmmakers inserted two old pop songs that did not fit at all and interrupted the drama. I'm not sure what they were thinking.


I wish it hadn't been so gory. It wasn't necessary to see the actual deaths, and the special effects used almost looked silly.


Death Note (2017 Netflix Original) is a well-crafted adaption taking the basic elements, ideas, and themes from the manga and created a wholly American production that has a solid story and clear plot. Superfans of the original will probably be upset at all the changes, but they were necessary to make a good film. A direct adaption wouldn't have been a strong movie nor attracted an American audience. I give it a solid 4.5 out of 5 boxes of popcorn.