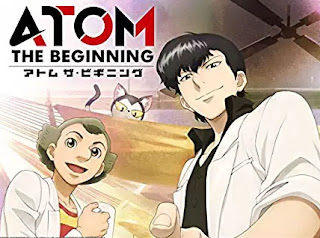 I am a huge fan of Osamu Tezuka and his most famous creation Mighty Atom aka.Astro Boy. I own all the Manga and have both TV series Tezuka worked on on DVD. There is something magical about his creation that transcends time and national borders. I've been less fond of adaptions of Tezuka's work by other people. They always seem to miss the essential heart in most of Tezuka's work.

Atom: The Beginning is a 2017 12-episode anime based on Osamu Tezuka's Mighty Atom (aka Astro Boy) that focuses on the creators and early attempts at creating a robot. It is rated G and appropriate for all ages.


Main Characters. The main characters are so well developed and explored; they feel real and I want to see more of them. They also have such a great relationship that is masterfully explored both with times they get along and times they lock horns. It's very dynamic. In the Astro Boy manga, Tenma is shown as a fairly sinister character with little compassion. This version explores why he's like that and makes you feel sympathetic for him.

Six (Mighty Atom Prototype). This takes place before the creation of Astro Boy, a robot that is so human. This offers an excellent explanation for how that is possible and shows you what early attempts to create such a personality look like. It is so well thought out.

Action. This show is filed with some amazing action that is beautifully animated and makes you feel like you are in the middle of it. It couldn't have been handled better.


Pacing.  Like most anime this show is very decompressed, which means it moves very slowly and takes awhile to get anywhere. For a western audience, this would be pretty boring.

Flat Characters.  While the main characters are extremely well developed and interesting, most of the other characters are very flat and uninteresting. Most are little more than plot devices.


I think the producers took the right approach and did a great job adding to the existing mythology. There's nothing I would have done differently.


Atom: The Beginning is a charming anime that focuses on Tenma and Ochanomizu's years in school developing robots. It does an excellent job examining their relationship, their differences, and their goals as well as the birth of Astro Boy's basic character. Like most anime, it is slowly paced with amazing action scenes disbursed throughout. I give this show 4 out of 5 remotes.