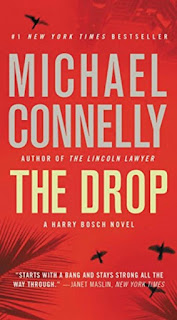 I've become a bit addicted to Michael Connelly's writing and the world of Harry Bosch. I just wish I could get into the TV series on Amazon Prime.

The Drop by Michael Connelly is a crime in the Harry Bosch series. It is available as an eBook, Audiobook, and those paper things your grandparents used to read.


Story and Writing. The story was incredible. I couldn't put it down. The book contains two different cases that don't directly interact. Normally this is a turn off for me, but somehow the author managed to move from one to the other without losing any steam or interest.

Twists. This novel actually surprised me with where it went. I thought the story was over a couple of times, but it kept going, and I wasn't sure where the author wanted to go and why. But after reading the twists I saw why and was glad.

Main Character. The main character still isn't that interesting. He's kind of a jerk, he's not that clever, and I still have a hard time rooting for him.


The Drop by Michael Connelly was the best Harry Bosch book yet. The story really grabbed my attention and took turns I didn't see coming, but ones that made sense and didn't feel like a cheat. I give this book 5 out of 5 eReaders.