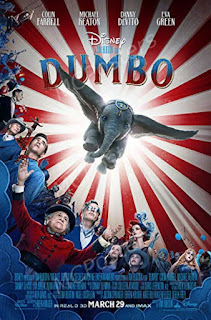 I hate Dumbo. I hate the story. I hate the Disney animated film. When I heard about the live action remake, I looked to the heavens and said, "Why?" Then I heard Tim Burton was directing it and suddenly got very excited and decided to see it opening night.

Dumbo is a 2019 live action family film. It is rated PG and is appropriate for all ages.


The Story. The story was solid. There was

The Characters. The actors did such a great job portraying their characters, and the script gave them plenty to work with. Everyone (minus the children) was unique and likable.

Visual Feast. This movie was gorgeous, and as it progressed it only got more and more gorgeous with incredible sets, costumes, and cinematography. Tim Burton is a master of the visual.

Weirdness. The original cartoon had several bits of weirdness (pink elephants, singing elephants, mouse guide, magic feather) that barely made sense in the cartoon. Somehow the filmmakers were able to incorporate all of those in a way that not only worked but added to the movie.

Pacing. The movie moved at a great pace. I was never bored checking my watch, but the movie still moved at a gingerly pace allowing the audience to really absorb what was going on and to feel the emotions with the characters.


Ending. The ending wasn't as well thought out as it could have been. It was too easy and preachy.

The Children. The children were very stiff, generic, and predictable. They weren't particularly likable.


I wish the ending had been better thought out and not the obvious, easy, preachy ending seen all too often.


Dumbo is a gorgeous, well written, well acted family film. The visuals from the sets to the costumes to the cinematography are feast for the eyes--Tim Burton is a master of the visual. The story was solid filling in a lot of explanation and motivation. The script gave the actors a lot to work with, and all of them (minus the children) gave a great performance. The pacing gave the film lots of room to breath without ever feeling slow or boring. The ending wasn't as well thought out as it could have been being too easy and too preachy. I give this film 4.5 out of 5 Boxes of Popcorn.