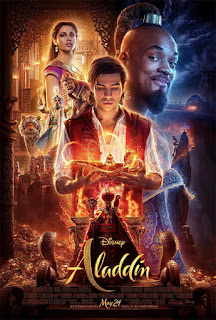 I remember seeing the original Aladdin cartoon in theaters and enjoying it, but not as much as The Little Mermaid and Beauty and the Beast. I was excited to see the live-action remake until I heard Guy Ritchie was the director. He does some awfully strange things, so I wasn't sure how this would turn out.

Aladdin is a 2019 live action fantasy family film. It is rated PG for action and is appropriate for all ages.


Aladdin. I really enjoyed the Aladdin character. He was very likable and did a lot of cool stunts and amazing dancing.

Story. The story was solid. The filmmakers did a good job filling out backstory and motivation that was lacking from the animated feature.

Dancing. This movie featured quite a bit of great dancing. I just wish there had been more.

Visuals. This movie was visually stunning to look at. Everyone from the art director to photographer to production designers to costume designers did a top-notch job.


Jafar. It has been said that a hero is only as good as his villain. Fortunately that isn't true or this movie would have been a disaster. Jafar was not charismatic, whily, menacing, or anything else a great villain needs to be. He was such a pushover.

Singing. The singing was good, but not as good as the animated feature.

Shoehorned Political Message. It's 2019 so the producers felt obligated to shoehorn the current political fad into the movie in a way that felt forced and uninspired. There are a lot of different ways they could have shown Jasmine to be a strong character other than seeking ultimate political power. That actually made her character look weaker, not stronger.


I wish the singing had been better and the forced political message had been left out.


Aladdin is a great adaption of a classic animated film and a lot of fun for the whole family. Most of the cast was excellent and the story was solid with good additions filling in backstory and motivation the original lacked. The film was visually beautiful to watch, and the dancing was really impressive. The singing could have been stronger and more on key. The biggest problem was Jafar and what a weak, uninteresting, nonthreat they made him. Fortunately, the Aladdin character was great and carried the movie with his charm, great stunts, and amazing dancing, even if he seemed to overact his awkwardness. I give this film 4.5 out of 5 Boxes of Popcorn.