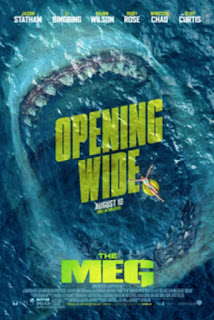 I read the original novel this film is based on quite a while ago completely unaware Hollywood was developing a movie. When I found out they were I scratched my head wondering how they were going to do it. The book has a lot of story, way too much to include in a 90-minute to 2-hour film.

The Meg is a 2018 live action science fiction action film. It is rated PG-13 for language and violence and is appropriate for teens and up.


Limited Scope. This film basically takes the first major scene from the novel, spends a third of the movie recreating it, then creates a new two thirds showing the ramifications and a conclusion. It was a very clever move, because the novel had way too much for a single film.

Action. The action was for the most part really well done and really fun to watch.

Pacing. This film was excellently paced. I never got bored, yet I felt thrills at all the right moments from the excitement and horror.


All Action, Little Story. While I think it was clever of the filmmakers to focus on the first major action scene and expand on it, the movie didn't feel like a complete movie. It would have been nice to include a little more story content.


I wish there had been a little more story. There were a lot of characters and relationships that could have been developed more even in the context of the limited scope.


The Meg is an exciting action/horror flick about a team of scientists battling a terrifying discovery they never expected to make. The novel this film is based on has enough story for three movies, so the filmmakers were clever to take the first major scene, film it accurately for the first third of the film, then create a new ending based on what would naturally follow. The action is very well done and the pacing is just right. The story is a little thin. There are a lot of characters that little is done with. The "twists" are also not as shocking as the filmmakers would like them to be. But overall, this is a really fun film. I give this film 3.5 out of 5 Boxes of Popcorn.