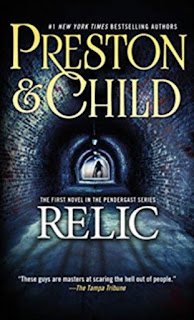 Sales on Audible are a great chance to try out new books and new authors without risking too much. I've both found some new favorites from this and lost precious hours from my life I will never get back. But how else are you going to discover new gems?

Relic (Pendergast, Book 1) by Douglas Preston and Lincoln Child is a science fiction monster thriller. It is available as an eBook, Audiobook, and those paper things your grandparents used to read.


Twist. This book is about a monster that is loose in a museum, and the authorities have to both get everyone out and subdue the beast. The twist comes in the nature of the beast and the revelations at the end. They are worth reading thru to the end for.

Pendergast. It's funny this character is the name of the series, because he plays such a minor role in the story and has less page time than the main characters. And yet he is the most interesting character somehow.


Pacing. This book moves slowly. The pacing isn't so slow the reader becomes bored, but it does take effort to pay attention to the story.

Characters. The characters are really bland and formulaic. They read like copies of common characters I've read before with nothing new added and the execution of the characters not as well done.

Story. The story is good but nothing special.


I wish the authors had put as much thought into the story and characters as they did the twist, because THAT would be an incredible book I couldn't put down.


Relic (Pendergast, Book 1) by Douglas Preston and Lincoln Child has a really great twist and take on the science fiction monster genre, but isn't as strong in the interesting characters, intriguing story, or exciting action departments. The story is a little slow throughout, even during the "intense" action scenes. None of the characters are all that memorable or elicit much of a reaction as they are fairly common stereotypes with fairly common motivations and character arcs. The saving grace is the twist on the monster and epilogue where the repercussions are explored. I give this book 4 out of 5 eReaders.