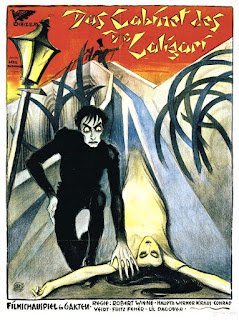 Recently a friend suggested I review horror movies for the Halloween season, and I thought that was a good idea. I'm not much of a horror movie fan (although I love horror TV shows for some reason) but there are a few I thought were well worth watching.

The Cabinet of Dr. Caligari is a 1920 German Expressionist silent horror film. It is unrated and is appropriate for teens and up.


Visuals. This movie is gorgeous to look at from the sets to the costumes to the cinematography to the title cards. It has such a strong artistic look and sense that has been borrowed and copied by numerous artists and filmmakers ever since.

Terror. Even though this movie is nearly 100 years old and silent, it is truly terrifying. The antagonist of the film, Cesare, is so creepy and so terrifying that he made me jump more than once.

Mood. This film has such a strong mood created by great organ music, impressive acting by the actors and actresses, and of course the visionary production design.


Ending. The studio forced the director to change the ending to a strange "it was all a dream" nonsense. While it doesn't ruin the film, it does take away some of the punch.


The Cabinet of Dr. Caligari is a brilliant and disturbing horror film from the silent era. It is one of the most gorgeously shot films from the brilliant sets that defy physics to the costumes to the amazing cinematography to the creepy title cards. This movie is so terrifying, and it accomplishes it without the gore or profanity of modern horror films--just solid storytelling and acting. I highly recommend this film and give it 5 out of 5 Boxes of Popcorn.