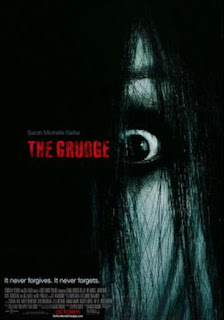 I don't watch a lot of horror movies, because they tend to be more gore than spine-tingling terror. But a few years ago I saw one that was everything a horror flick should be.

The Grudge is a 2004 supernatural horror film based on a 2002 Japanese film of the same name. It is rated PG-13 and is appropriate for teens and up.


Acting. Sarah Michelle Gellar is one of the greatest actresses ever, and she doesn't disappoint in this film. She really conveys the proper emotions at the proper times. And the actress who plays the ghost is incredible. You'd think she was an actual spectre.

Terror. This movie is truly terrifying without resorting to gore, Nazi death camps, or other overused devices. This movie creates so much terror with just a little music, great production design, and brilliant cinematography.


Story & Pacing. This film doesn't have a lot of story which makes it feel long and a little slow. It's a brilliant experiment in filmmaking, but not so brilliant in the entertainment department.


I wish there had been more story. Developing Jason Behr's character and his story would have helped.


The Grudge is a a terrifying supernatural horror film that does so much with so little. The filmmakers are able to generate real terror in the viewer without resorting to gore, Nazi death camps, or other overused devices. Instead it relies on just a little music, great production design, and brilliant cinematography. Sarah Michelle Gellar is brilliant in this. The story is a little thin with other characters being underdeveloped which makes the movie feel a little long and slow. If you're looking for a film that is terror without the gore, I recommend this one and give it 3.5 out of 5 Boxes of Popcorn.